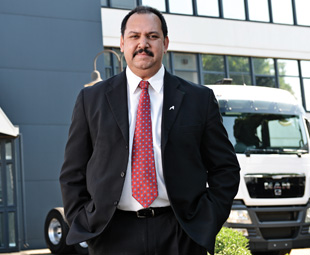 Chatting away with Dickson, it’s immediately apparent that to him business relationships are personal relationships. Being a values-oriented man, this aspect of business is something that comes somewhat naturally to him.

“The most rewarding part of my job is serving customers. I’m a firm believer in relationships,” says Dickson. “If you don’t put back into the circle, it’s not sustainable. I love nurturing a relationship that grows into a personal friendship. It brings in that element of trust and that’s most rewarding,” he continues.

It’s this attitude that has helped Dickson pave his way to success in the dynamic, relationship-based transport industry. It’s a trait he’s always had. Dickson received his call up for national service in 1980, shortly after joining the Durban Transport Management Board of the Durban City Council.

He holds a three-year diploma in road transportation from the then Rand Afrikaans University, various business management diplomas and an MBA he achieved in 2001. Ongoing education has been very important throughout Dickson’s working life; having attended a leadership programme at the Voith Academy and a general management programme at an Oxford University through MAN.

“I always tinkered with bikes and cars so I had that mechanical aptitude, but it was never my intention to do that for the rest of my life,” he laughs. Nevertheless Dickson stayed with the council until 1989 when an opportunity arose for him to join the very company he now runs (albeit at a much more junior level) as head of quality control at the MAN assembly plant in Pinetown.

Dickson stayed there for two years before moving over to Voith Turbo, where he really began to grow himself. To illustrate the importance Dickson places on the relationships he builds, it’s almost impossible to mention Voith Turbo to long-time members of the industry without them mentioning “the old days” and “Bruce Dickson” … Of course, he did give the company 18 years of service!

Nevertheless, the challenge to run a really big business appealed to Dickson, and it presented itself in 2009 as the opportunity to run the Centre East (KwaZulu-Natal and the Eastern Cape) of MAN’s operation. “It was one of the non-performers in the organisation at that point and we turned it around before the end of 2009,” he relates. “By the time I handed it over at the end of 2011 it was the real star of our business.”

By now, Dickson’s career with the company was really on the up; first he was appointed head of marketing and communications and a mere six months later was offered the opportunity to be joint CEO. “I really enjoyed that period at MAN and never felt overloaded – we ran it very well. It was one of my most memorable times,” he says.

Today, Dickson has the distinction of being CEO of MAN Truck & Bus South Africa as well as a vice president within MAN Truck & Bus AG. “I really consider myself very fortunate that the opportunities have been here. I also believe I’ve worked hard for everything I’ve achieved,” he adds.

And the schedule for the day could be trucks or buses. “We’re in the service business, so we have to be flexible,” says Dickson. “I think it adds to the excitement of being in this game.” Dickson explains that truck operators want to know that they have the lowest possible cost of ownership and service backup, while bus operators enjoy an even more personal business where relationships are key. It’s therefore important to have a credible name …

“Credibility is most important because without it there is no relationship, and without relationships the business is not sustainable,” Dickson says. With a career as sustainable and a name as credible as his, who could argue the fact? 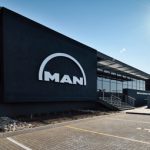 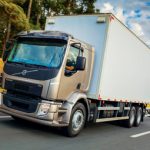