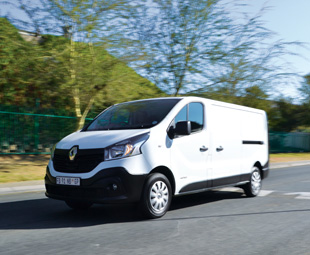 Gone are the days where what was, literally, a box on four wheels featured only a small space for the driver and some headlights up front. Big or small, the humble van is becoming something to look at, says GAVIN MYERS

Take Renault’s new Trafic, for example. Do you remember what the old one looked like? No? Well I’ll bet you won’t forget this one too quickly. Why? It has a bit of personality – something we’ve begun to notice in its counterparts from Ford, Peugeot, Fiat and Volkswagen as well.

The Renault, though, has a thoroughly modern Renault-family look to it; with its proud badge, broad grille and bold headlights. The black plastic bumpers, grille, mirrors and rear light surrounds don’t necessarily detract from this – being perfectly functional for tough inner-city transport work.

This newfound personality is also carried over to the interior, which blends form and function for a perfect work environment. Piano-black air vents and some chrome detailing adds a touch of class, while when operating the switchgear it feels like that of a passenger car. The instruments are dominated by a large digital speedo. 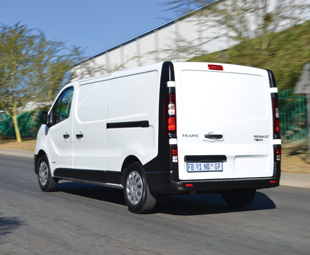 What really counts, though, is the removable clipboard that mounts onto the centre seatback when it’s folded forward (it fits perfectly into the document slot atop the dash, too), as well as the wide-angle mirror in the passenger sun visor – so simple, yet so practical.

The seats are well-shaped and the cabin is comfortable enough for three; with a multitude of clever storage spaces, air-conditioner, power windows and a (somewhat fiddly) Bluetooth audio system. Only a driver airbag is offered, however, but complementing this on the safety front are anti-lock brakes with Electronic Brakeforce Distribution, hill start assist, side impact bars and traction control.

New Trafic is also powered by a new engine – a 1,6-litre direct-injection, common-rail diesel unit that employs twin turbo technology to produce high torque at low revs and better power delivery at higher revs. The result is an impressive 88 kW and 320 Nm. This drives the front wheels through a six-speed manual gearbox.

Next to the shifter is a nifty button labeled Eco. Press it and the engine’s power delivery is subdued to aid fuel consumption. Should full power be required, the driver need simply press the accelerator button to temporarily disable Eco mode. It’s an effective system that makes the journey more relaxed without sacrificing drivability. 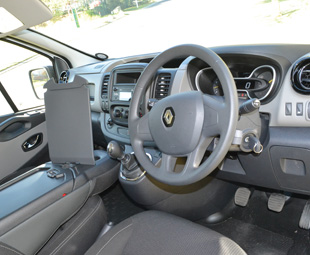 What about the size? Well, there is only one option available locally, but with it you get 5,3 m3 of load volume and 1 200 kg payload capacity. The gross vehicle mass is 3 010 kg, while a maximum (braked) towing mass of 2 000 kg is permitted. Carrying something of length, rather than volume or weight? No bother – objects up to 4,15 m long can be loaded thanks to the nifty through-loading flap in the bulkhead and liftable section under the passenger seat.

Any gripes? Well, the audio system is fiddly and parking sensors wouldn’t go amiss, given the small wing mirrors. The biggest issue is the lack of a cab-mounted isolator lock for the loading compartment, though a deadbolt is fitted to the inside of the rear doors.

The Trafic is priced competitively at R392 200 and comes with a five-year/150 000 km mechanical warranty, six-year anti-corrosion warranty and five-year/100 000 km service plan.

It’s a very likeable van with high levels of usability – and a personality to boot. 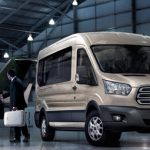 Prev International Van of the Year: class of 2017
Next Registration woes could put dealers out of business! 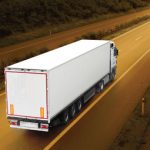