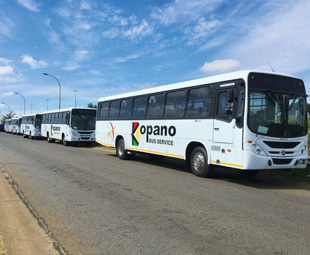 Since 2001 the bus group comprising Kopano Bus Service, Madodi Bus Company and Mathole Bus Service has built up a relationship with its bus supplier of choice, Scania South Africa. In fact, the group has 159 Scania buses in its fleet covering local and cross-country operation

Most recently, on July 13, the group took delivery of ten Scania F95 65-seaters buses – which is in addition to 12 F95 65-seater and three F95 80-seater buses that were added to the fleet in May. Currently, the fleet is comprised of Scania F94 and F95 vehicles.

So what makes Scania buses so suitable? Olivia Maponya, executive director of Kopano Bus Service, explains that the success of the relationship can’t be put down to just one factor.

Operating commuter services across the Limpopo province, as well as being available for private hire and organised parties countrywide, the group requires its buses to be reliable, low maintenance and affordable. Maponya says that the Scania fleet meets this brief, but it’s also the “behind the scenes” support and service that sets Scania apart as a bus supplier.

“For example, a big advantage is that Scania also provides its own in-house financing. This makes things easier for us as a client as we don’t have to run around to financial institutions seeking funding,” Maponya adds. Indeed, this is a big advantage, considering the buses are replaced on five-year cycles.

While replacing the fleet this regularly helps to keep it young and maintenance costs low, it also has another benefit for the group – in that driver satisfaction is raised.

“Our drivers always get excited and are filled with hope and confidence when we introduce new Scanias to the fleet. They always show appreciation, and we’ve noticed it through their extra effort, commitment and dedication when taking out their daily tasks,” Maponya says proudly. When new buses are delivered (and whenever required) Scania provides the group’s drivers with training.

“We are able to monitor and manage the drivers’ behaviour and the overall fleet using the Scania Fleet Management System, which is installed as a standard feature to all new buses,” Maponya elaborates.

This allows the company to be aware of any technical issues which, says Maponya, are “addressed within a blink of an eye”.

“The Scania staff are very professional, and we are pleased with the manner in which they support their clients and stand by their products – which gives us an added incentive and peace of mind in our decision to run a fleet that is 100-percent Scania,” she adds.

This personal touch never goes unnoticed. “In October 2015, our board decided to visit the Scania international head office in Sweden to gain intensive knowledge and understanding of the product. We were taken through the chassis and engine assembly plants and learnt about the entire bus manufacturing processes as well as the standards to which Scania products are made – and we were quite impressed!” Maponya says modestly.

Of course, a relationship is a two-way street. Esaia Taunyane, based at the Scania Elandsfontein dealership, has been dealing with the group since 2007. “This is one very professional operator – from the management to the drivers, inspectors, conductors and workshop staff. If I had to describe a model client, this would be it,” he says.

A model client and a model relationship, what more could anyone ask for? 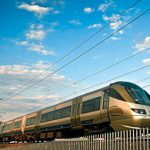 Prev Call in the sangomas?
Next New-vehicle sales drop drastically 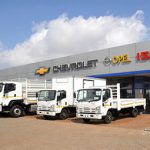