Strength in the face of hardship 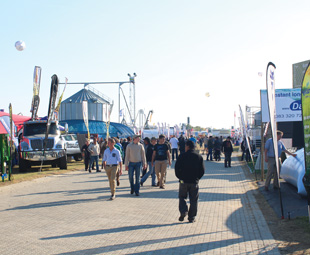 The agricultural sector has been facing adversity and there were noticeably fewer visitors at the 2016 Nampo Agricultural Trade Show. Yet, those who made the trip were serious about what they wanted. As ever, the many suppliers were happy to oblige, writes GAVIN MYERS.

For as long as we can remember, Nampo has never once failed to impress. For the past decade, exhibitor numbers have been well above 600 – at times closer to 700 – while visitor numbers peaked at 73 552 in 2011, settling above 69 500 in the last two years.

These numbers are not to be scoffed at – especially for a trade show that this year is half a century old, and has grown to be one of the largest of its kind in the southern hemisphere.

However, something was different in the lead up to the show this year. The summer of 2015/16 was particularly brutal for South African farmers. Rains were late and few. Crops and livestock died, forcing many to give up their proud way of earning a living. 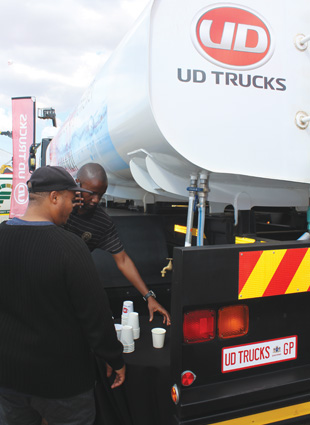 What would this mean for Nampo? Would many exhibitors pull out? Would as many visitors attend?

According to Nampo Harvest Day chairperson, Cobus van Coller, it is especially important that producers visit the show in a year of drought. “It is vital that producers talk to one another, exchange information and find out what can be added to one’s farming enterprise to add further value,” he says.

No matter, the FOCUS team had to attend. Toyota SA came to our aid, giving us the use of an all-new Hilux for the trip to Bothaville. This was the same model as the 2.8 GD-6 Raider we reviewed in the May edition, and just about every analysis we made in that review held true on this journey.

The improved ride made the 500-km round trip perfectly bearable; the new 2,8-litre engine consumed just 7,9 l/100 km, being whisper quiet and strong in overtaking at the same time; while the improved interior creature comforts eased our weary city-slicker souls on the way home.

Then there were the many admiring (and jealous) glances we received driving in and out of the Nampo grounds – the Free State is Toyota country, after all!

Once we were in the show grounds this was clearly evident at the Toyota stand, which was one of the busiest.

You can’t risk mentioning these fierce bakkie rivals in the same breath at a place like Nampo, but, over at the Ford stand, it was a similar scenario. The main attractions there were the very pretty Mustang, very loud Ranger rally truck and the very amusing strongman challenge. 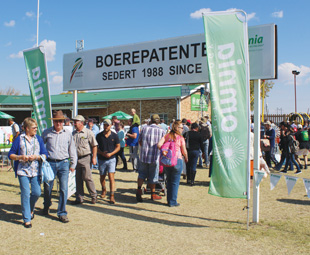 According to Eben van der Linde, Ford regional sales manager for Free State, Northern Cape and Natal, there was a measured 5,5 percent growth in interest on the stand compared to last year. “We’ve created a feeling of fun and excitement on the stand with these attractions, but the buyers are really interested in the Transit chassis cab and the small Transit Connect panel vans. Our representative from Ford Credit is taking applications at the stand, and we expect to do numerous deliveries at the show.”

There were all the other usual bakkie and light-commercial suspects at the show, too. With the stands of Nissan, Isuzu, Volkswagen, Tata, Mitsubishi and Foton all alive with excited agriculture-types eager to find their way into the driver’s seats of the latest models. As usual, the opportunity was there to do just that on the 4×4 demonstration track. Even Suzuki previewed its new LCV – the Super Carry.

Of course, the beloved bakkie is but a small portion of the exhibits at Nampo – in number and size … Admittedly, we don’t know all there is to know about farming equipment, but, take our word for it, it comprises some very serious pieces of machinery indeed! 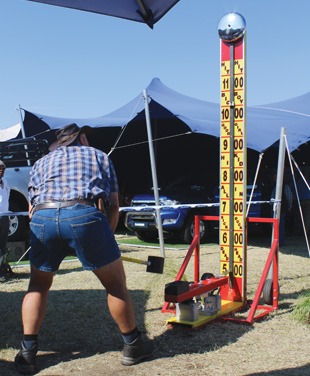 Even the tyres are impressive! Chatting to Adriaan Coetzee, marketing operational manager, business to business, Michelin Tyre Company SA, it was clear that Michelin had attracted its fair share of interest – even from the younger set.

“The kids are really attracted to Bibendum (the Michelin Man), but our feedback is good and we’ve had quite a few sales. This year we promoted the Bidblade hard-surface tyres in particular, which are suited to industrial applications,” he explains.

Naturally, most players from the trucking and related industries were present, too.

“This is the 15th time that FAW has participated at Nampo. We’ve recognised the patronage and loyal support of the multitude of agricultural customers who have, over the past 22 years that FAW has been present here, remained committed to our brand,” says Cheng Zhang, marketing and strategy manager at FAW Vehicle Manufacturers SA.

Over at the MAN stand, it was encouraging to note that even second-hand vehicles were being sold off the show stand!

“Our flat-deck MAN from the TopUsed division sold on the first day,” exclaims Deon Otto, head of truck sales and support, private capital dealers, MAN Truck & Bus SA. “Even though we’re here with all our latest technology, the TGM 18.280 with cattle body has been a big hit, and there has been nice feedback about the VW 24.250,” he motions. “This is one of the shows that, in my opinion, you have to be at.” 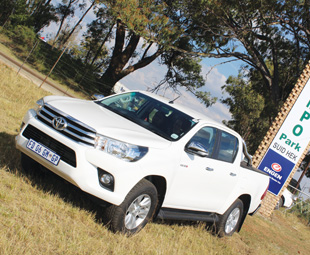 Somebody who has certainly been introduced to the charms of Nampo is Iveco South Africa’s new MD, Carmelo Impelluso. “I’ve never seen a fair like this. In Europe there isn’t anything similar; only those dedicated to trucks. I wasn’t so convinced when I heard about it, but I get it now. It’s interesting and a nice opportunity for me to be here,” he smiles.

The Volvo Group was at Nampo in full force, too, with group brand UD featuring a very interesting – and given the drought issue, appropriate – attraction at its stand. This was a UD Quon fitted with a specially equipped water tanker, from which hot-and-bothered visitors could conveniently quench their thirst.

“The tanker is usually based at the Vryheid area and does 25-km round trips every day to the nearest safe-for-consumption water source, which it then delivers to local churches and schools,” explains senior marketing manager at Volvo Group Southern Africa, Laureen Stock.

Daimler Trucks put on a mighty display; with examples from the Mercedes-Benz truck and van range, Fuso, Freightliner and Western Star drawing unbridled attention. In fact, the vans were seemingly among the most popular. 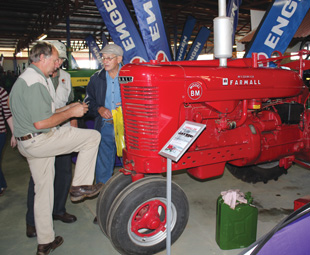 “The agricultural sector benefits from our van model offerings, such as the Mercedes-Benz Vito Mixto, which is a workhorse and people carrier all in one, and the Mercedes-Benz Sprinter – which ticks all the right boxes when it comes to moving staff members from one site to another,” says Nicolette Lambrechts, head of Mercedes-Benz Vans Southern Africa.

It would seem that, despite the adversity presented by conditions this season, it will take a lot to fully dampen the spirits of the South African agricultural industry …

High levels of industry support are certainly aiding this spirit. Engen, for example, handed over R1 million to Agri SA for drought relief at the show. “We understand the negative impact exerted on agriculture by the current drought and we hope that our donation will help to make a small contribution in assisting farmers,” says Mike Stead, Engen’s manager: Commercial Fuels.

“Although Grain SA was unsure of the effect that the past season’s drought would have, we are impressed with the positive attendance figures of the 50th Nampo Harvest Day,” says Jannie de Villiers, CEO of Grain SA. 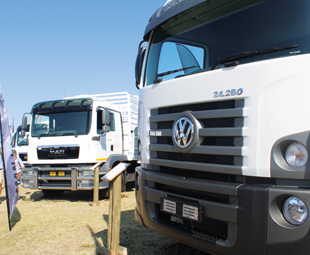 “Rain in the grain-producing areas recently, has had a positive effect on the state of mind of the producers. Although it did not rain money or grain, it has instilled hope, and the positivity among producers is noticeable and heartening. Although grain producers haven’t finished harvesting yet, they are planning the next crop at full speed …” he concludes.

Here’s hoping the next crop will be back up to full strength – because we know Nampo will be as ready for it as ever. 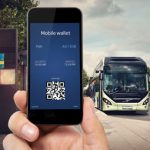 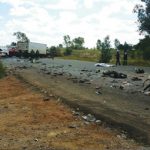