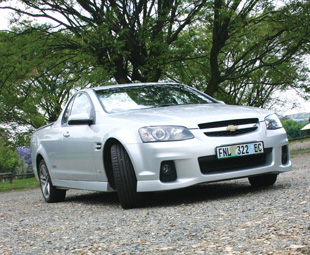 Yes, the Aussies are quite good at designing and building cars and bakkies. One prime example is the Holden Commodore, known to us as the Chevrolet Lumina – in this case the Lumina Ute. GAVIN MYERS does something he vowed he’d never do…

“Oh bugger!” was my first thought. Followed rapidly by: “What have I just done?” Both in slightly less polite language. I’d disengaged the traction control of this 270 kW, six-litre V8 hooligan with hardly any weight over its rear axle, bumped the shift lever into second and put my foot down entering a corner. The result was not pretty…

The tail, you see, swung round to the tune of screaming rubber and a howling, growling engine/exhaust combination. Followed by a quick shuffle of the wheel through my palms and slight adjustment on the throttle pedal, the result was a delicious, controllable power-slide… and a Cheshire Cat grin across my face. “Oh no, it can’t be!” I laughed – I’d fallen in love with something Australian, something I vowed I would never do.

Like I said: not a pretty result. Not pretty at all.

I suppose I could soften the blow by telling myself the Holden brand is owned by General Motors and that the brutish, but smooth, old-school push-rod V8 is very American. Very, in the fact it comes out of the Chevrolet Corvette. That’s pilfering from the corporate parts bin at its (almost) looniest. But this is a loony vehicle: it couldn’t not be. The Lumina SS Ute, and its sedan brother, has been with us for a while now though, so I won’t go into more detail. 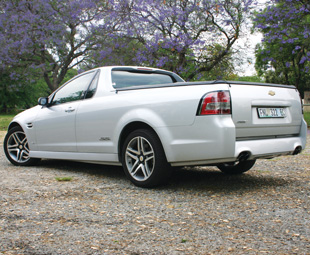 However, I will focus on the improvements the Ute – now known as the SSV – was subjected to during the range’s mid-life face-lift last year. The front end has been nipped ’n tucked: the re-designed headlamps; pointier and broader grille; and re-sculptured bumper and lower air dam conspiring to make an already staunch vehicle look even more aggressive and in-yer-face. However, not much else has been done to lift the exterior of the Ute, apart from some rather sexy-looking new 18-inch alloys.

Yet that’s not too serious, because the Ute always looked like something special. At five metres long, just under two metres wide and almost 1,5-metres high it has presence aplenty.

But the interior needed a little work – and that’s where Chevrolet best spent its efforts. There’s a new centre consol, re-designed instruments and silver detailing around the cabin. It’s a much classier environment and doesn’t feel too cheap this time round; although that odd, flimsy (but, admittedly, well designed) handbrake lever will irk you at first use.

But the rest is almost perfect. The dual-zone climate control is still there, joined by an improved touch-screen infotainment system that now incorporates full Bluetooth functionality (hands-free and audio streaming) and auxiliary and USB connectivity. However, you can’t access the navigation.

You fall deep into the big, comfy, well-bolstered seats and with everything adjusted properly you have plenty space, with everything nonetheless remaining well within reach. The driving position is almost perfect, except for the far-off-to-the-right accelerator pedal and some bad blindspots – courtesy of the thick C-pillars and high rear window. Oh, and for the six-speed automatic version we had on test, shift paddles behind the wheel would enhance the fun somewhat. But there’s something about knocking the shift lever back and forth that suits the character of this vehicle. 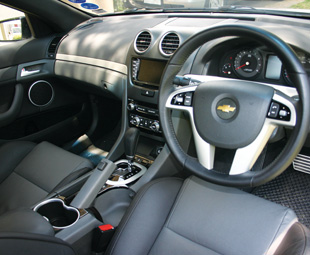 And knock that lever about you do – if for no other reason than to hear the V8 in all its glory (sadly, the quad tailpipes are a little shy with their vocals). Not that revving it is really necessary – there’s a full 530 Nm of torque on tap, allowing easy progress in any style of driving. Cue my inner petrolhead: Chevrolet claims it’ll crack 0-100 km/h in a shade over six seconds and top out at 250 km/h – faster than any bakkie really needs to go. Despite its power, the Ute is easy to handle (it has a limited slip diff and ESP traction control) and its powerful brakes, with ABS, EBA (Electronic Brake Assist) and EBD (Electronic Brakeforce Distribution), have no problem reigning the Ute in.

The V8 also offers great lugging ability You’ll even convince yourself that, despite the fuel penalty (dealing with mainly diesels, you’d be horrified) it does a much better job than a diesel ever could. Its long but relatively shallow load bay allows a payload of more than 600 kg. When the lined load bay isn’t being utilised it’s covered by one of the most well-designed, user-friendly tonneau covers I’ve come across. However, the tailgate can only be opened from the inside, which proves a difficult task with the vehicle fully loaded. In addition, there’s a full 245 litres of space behind the front seats. The vehicle can also tow a mass of 1 600 kg.

The Lumina range comes with a three-year/60 000 km service plan and five-year/120 000 km warranty, with roadside assistance. However, at R432 500,00 for either the manual or automatic Lumina SSV Ute one can’t help but feel that’s a lot of money for a single cab bakkie. But it can’t be viewed as merely that: this is a vehicle with a broad range of talents. It’s sportscar quick, pant-wettingly fun to drive, has the image to match and is comfortable and well-equipped – with the added benefit of the extra practicality of a load bay.

Yet no matter which talent you put emphasis on, the biggest problem you’ll encounter is the fact you’ll also fall in love with an Australian. Oh, bugger!

*My apologies for indulging in this article’s overt petrolheadedness; normal, market-relevant, diesel-powered LCV reviews will continue next month.