A specialised focus for a specialist market 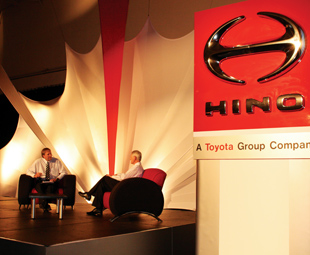 In October last year Toyota Trucks officially announced that, henceforth, the company would be trading under the banner and branding of Hino. NADINE VON MOLTKE attended the formal launch of the company’s new business model, held recently at Gallagher Estate in Gauteng.

In a time of contracting markets and tightening economies, when doom and gloom dominate the news pages and market reports, it was refreshing to attend a launch presenting a promising future filled with changes for the better.

Such was the mood at Hino’s launch in April where the company’s new business model was announced.  Key role players in both the Hino and Toyota SA camps gave a detailed account of what the change entails and why it needed to happen.

Kicking off the event and welcoming an array of VIPs from both South Africa and Japan was Andrew Kirby, Toyota SA’s senior vice president for sales and marketing. “Today we are presenting a bright future for Hino in South Africa,” he began, before outlining the reasons for the major shift within the Toyota Group’s truck division.

According to Kirby, the newly created Hino division within the Toyota Group in South Africa is the result of years of planning based on extensive market research. “Our research revealed that our clients wanted a dedicated truck service that was fully responsible for all the business functions associated with the truck market,” he explained.

In other words, Toyota Trucks’ clientele wanted a differentiated, focused and dedicated truck company addressing their needs. The result – which was formally announced in October 2008 at the Johannesburg International Motor Show – was to create Hino, a dedicated truck company within the group that would deal exclusively with the trucking community. All functions relating to the truck market would fall under this division.

The decision to name this division Hino was, of course, to acknowledge the history of Hino in South Africa and fully recognise Hino as a stand alone brand domestically.

Masakazu Ishikawa, the executive vice president of Hino Motors in Japan and a key speaker at the launch, expressed delight at Hino’s autonomous status in South Africa. “Today is no less important than the official announcement of the company’s name change,” he revealed. “In fact, this is the real starting point for Hino in South Africa as we strengthen the brand together.” 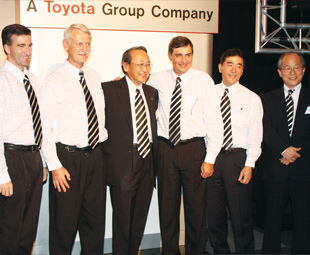 While the local history of Hino spans almost four decades, the brand was unknown when it first reached South African shores. As a result Hino trucks were branded Toyota Hinos, with a Toyota badge fitted above the then-winged badge of Hino.

Hino’s 300 Series – the company’s medium commercial range of vehicles – was also marketed as the Toyota Dyna. These trucks were treated as a separate range of Toyota commercial vehicles sold and serviced through Toyota dealerships. Furthermore, although the name Toyota Trucks differentiated a truck-specific division within the Toyota family, Toyota’s business model did not reflect this.

Under the Hino brand this separation is complete, even though a financial link still exists between the two companies, as is the case of Hino Motors which is a member company of the Toyota Group in Japan.

The shift from Toyota Trucks to Hino does, however, allow for a uniform truck range in addition to a new, dedicated truck company. It also paves the way for a mutually beneficial relationship between Hino in South Africa and Hino Motors Japan.

“We need good action and reaction times between Hino in Japan and Hino in South Africa,” explained Ishikawa. “The cultivation of these support structures will ensure that Hino is not only a great success locally, but that Hino customers are well looked after in terms of parts and service support, as well as product development specifically suited to African conditions.”

Johan van Zyl, president and CEO of Toyota SA, confirmed: “The support and guidance for South Africa’s operation from Hino in Japan is invaluable to us.” He also drew attention to the importance of road freight locally. “South Africa is on the move. Even though we are experiencing a tightening economy there are still areas of growth, particularly with regard to our roads and infrastructure. The projects creating this growth are heavily dependent on trucks and the transport industry.”

Ultimately, Toyota SA and Hino Motors will offer strong support to Hino locally as the division embarks on its own, dedicated path with separate structures and dealerships.

As Hino’s vice-president Piet van Wyk de Vries explained, Hino will now be serious about trucks in a way that an automotive manufacturer could never be, simply because of the nature of and differences between the truck business and passenger cars.

“Unlike the consumer-orientated business of cars, the truck business is capital intensive and needs to be dealt with as such, with sales and after-sales support that understand the nature of an operator’s business and the importance of efficient and well maintained trucks to that business,” he elaborated.

According to Van Wyk de Vries, dedicated Hino dealers across the country have not only embraced the new business model but are committed to supporting the product in every way possible.

“Hino customers are already happy with the product,” he said, “so we are starting from a good place. Now we just need to focus on improving a great product through specialised parts and service support.”