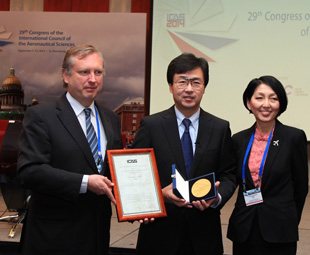 The origin of humanity’s desire to fly is lost in the distant past, but things have progressed far beyond Greek legends where Icarus flew with wax birdlike wings.

The Honda Aircraft Company received the 2014 Award for Innovation in Aeronautics, from the International Council of the Aeronautical Sciences (ICAS), for its pioneering contributions in the design and development of the HondaJet and its over-the-wing engine-mount configuration.

The award was presented at the 29th ICAS Congress – held in Saint Petersburg, Russia, last week (from September 7 to 12). “I am very honoured to receive this prestigious recognition in aeronautics,” says Honda Aircraft Company president and CEO, Michimasa Fujino.

He continues: “We had a vision to design a high-tech aircraft that would set a new standard in business aviation. To have Honda’s research and development capabilities recognised among the world’s most respected aerospace companies and society is significant for me.”

According to ICAS, the award acknowledges accomplishments in the development and introduction of innovative concepts in major aircraft programmes.

“Dr Fujino has earned this recognition with the HondaJet and exemplifies the innovative thinking that this award is intended to honour,” says Susan Ying, an executive committee member of ICAS. “Throughout the design and development of the HondaJet, Fujino has demonstrated vision in introducing an innovative design in a very conservative market.” 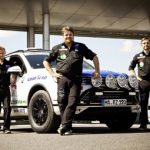 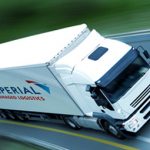