Braking up the industry 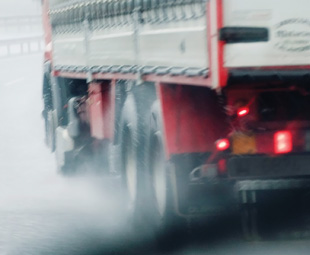 There are two types of freight operators – those who look after their brakes and those who don’t. DANIELLE DU TOIT discovers how easy it is for this to change, and why it absolutely must.

The number one safety feature on any vehicle is its braking system, which, with steady maintenance, is unlikely to ever fail. But some operators give brakes lower priority than aspects such as payload and time – and the consequences can be deadly.

Here is a frightening statistic: the number of trucks involved in fatal crashes on South African roads more than doubled in the year to March 2011.

A mind-numbing increase just short of 110 percent saw the previous year’s total of 731 jump by 800 units to 1 531. These figures come courtesy of the Road Traffic Management Corporation (RTMC) – which says faulty brakes were responsible for
15 percent of all fatal crashes.

Based on the law of averages, it can be said that truck operators who fall down on brake maintenance have 19 fatal accidents on their conscience each month – and one accident may cause more than one death. That’s a lot of lives lost. A lot of trucks lost too.

So what gives, especially when – with regular maintenance – brake failure is almost impossible? It all boils down to mindset, maintenance and product choice.

Two types of brake systems are used locally, drum and disc, and both work on a very simple basis – the higher the load, the more braking pressure needed.

Disc brakes are similar to the brakes on a car, but are larger and have far greater stopping power. The signal from the foot brake is received, and a brake booster activates a push rod which pushes a lever in the brake calliper; the calliper then pushes the pad against the disc, and the friction creates a braking effort. This all happens in a fraction of a second.

With drum brakes, an air signal is sent to the brake booster, which activates a rod, which pushes a slack-adjuster arm, which turns the camshaft. The rotating camshaft forces the brake shoes to push out against the drum, and the resultant friction causes the braking. The process is fractionally slower than disc-brake operation. 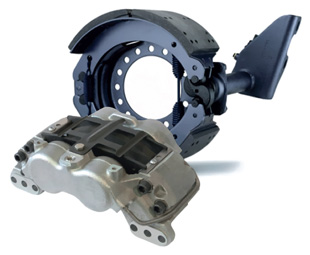 Brake fade – a reduction in stopping power after sustained repeated braking – is the result of friction-induced heat build-up. Temperatures of up to 1 000 degrees Celsius causes the materials to expand and force the driver to push down harder on the brake. Severe brake fade can result in a total loss of stopping power.

Another issue is harmonisation between truck and trailer. Whatever braking system is fitted to one should be fitted to the other, since neither should do more braking than its partner as this will affect the safety and durability of both the truck and the trailer.

Fill up one tank, empty the others
Large vehicles use air brakes as opposed to hydraulic systems. The compressed air is stored in air tanks, and maintenance – which involves simply emptying the water that accumulates – will ensure a working brake system.

Yet as Keir Guild, technical director at WABCO Automotive says, it’s not unusual to see tankers carrying dangerous goods with water pouring out of the air brake hoses. “Tanks should be drained daily, because water in these tanks will cause rust and result in brake failure.”

WABCO has an air tank that senses the presence of water in the system, and drains itself. However, as Guild points out: “You can buy a cheap system, maintain it, and have it work perfectly – or you can buy an expensive system, neglect it, and it will fail.”

Electronics have crept into virtually every aspect of truck design, and there’s a shortage of relevant skills in South Africa.

Enoch Silcock, general manager at WABCO Automotive, points out that  there is no entry-level air brake training programme. “The closest thing we have is diesel mechanic training. In the past few months, a number of companies have asked us where we they can get air brake technicians.”

WABCO has an in-house training programme, and encourages its graduates to go into the field, proving that skills-development initiatives do exist – but business can only do so much.

The rest is up to government, but the authorities often lack sufficient know-how. They know how to weigh a vehicle and, if it’s overloaded, what fine to impose, but analysing the braking power of a vehicle?

Millions is spent on testing stations and equipment, but that doesn’t mean it’s doing any good.

Says Guild: “Rustenburg got a weigh bridge with a rolling road tester. Six months later, I went there to train 100 police officers – only to learn that they had never used it. They didn’t know how to use it, so they let vehicles drive right through it. It had become a white elephant.”

There are many stories of state-purchased equipment still in its plastic, proof of good intentions but insufficient knowledge.

Piracy and politics
The use of pirate parts is another issue. The counterfeit industry is making a profit while infringing on the rights of the original equipment manufacturer (OEM).

“Their product with a mark-up is still cheaper than ours at cost,” says Silcock. “We have accepted that we cannot go after them.”

These cheap replicas are popular despite the risks they present, but there’s a reason OEMs make products the way they do: quality. Evidence shows the damage sub-standard parts can cause. And if, say, sub-standard discs are used, they affect not only the braking system, but also the suspension, the chassis, even the tyres; the whole vehicle can be compromised.

Government is responsible for our safety, but is it taking the right measures? In Europe, a bus is required to have EBS (electronic braking system), ABS (anti-lock braking system) and RSS (roll stability support). In South Africa, you don’t even need ABS.

Industry players may remember the ‘exciting new pneumatic anti-lock braking system’ that would ‘dramatically improve safety and reduce costs’ that was approved by the SABS a few years ago. It was later found to be unsafe and a recall of all vehicles fitted with the device issued. A reliable source says the SABS has limited resources, is inconsistent and has approved some scary things, such as certain suspension and braking systems in use on our roads.

This is the SOUTH AFRICAN BUREAU OF STANDARDS. The body tasked to approve only those products found to be capable of keeping us safe and protected. Does the SABS approve dodgy products because of limited resources? In December 2011, an SABS officer was arrested for attempting to solicit a bribe in exchange for the sought-after stamp of approval.

So where to from here? We need task forces dedicated to heavy vehicles, buses included. Currently, an officer in the Johannesburg Metropolitan Police Department (JMPD) might spend one week directing traffic, another issuing speed tickets and the next manning a weigh bridge. There is no continuity. If these officers were trained in a specific field, they would become experts in that field.

The phrase “prevention is better than cure” must be taken to heart. It can and does save lives. With some 526 000 heavy vehicles on our roads, preventative measures could mean the difference between 526 000 failures or not. 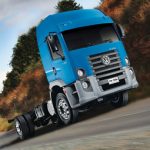