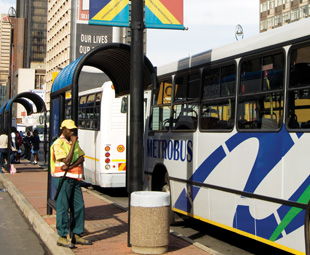 I recently experienced a close encounter with a Metrobus – so close, in fact, that the rear panels of my trusty Suzuki Swift were almost completely demolished. Personal transport woes aside, however, as we gear up for the 2010 FIFA World Cup the spotlight continues to fall on public transport. While improvements to the network are to be applauded, can we afford to pay the price of fleets of buses and coaches manned largely by undisciplined drivers, asks NADINE VON MOLTKE?

In South Africa, 2009 was undoubtedly the year of the bus. While many manufacturing industries were hard-hit by the world economic downturn, demand for bus bodies and chassis soared. One reason for this was the introduction of Bus Rapid Transit (BRT) in the country’s major cities. Another was the need to increase the size of luxury and semi-luxury coach fleets in readiness for the FIFA World Cup.

Unfortunately, however, ongoing concerns about poor bus maintenance and inadequate driver training have tended to put a damper on all this excitement. So has the sobering issue of attempts by taxi associations to hijack BRT.

The problem is that bus drivers often drive as dangerously as minibus taxi drivers. Let’s take my relatively minor bumper-bashing as an example. There is absolutely no doubt that the bus driver in question simply did not see me. In those few moments before the accident, I did not exist in the driver’s immediate reality; this despite the fact that I was hooting furiously, mute with horror as the bus inched its massive bulk into my precious car. It was a surreal experience.

I suspect that neither I nor the bus driver understands quite how our too-close-for-comfort encounter happened. For my part, while waiting at a single-lane slipway for the oncoming traffic to cease so I could proceed, a bus pulling up behind me should have been no cause for concern. But when the bus driver began to edge the enormous vehicle next to my car instead of behind it, I did begin to feel a little uncomfortable. Something about the manoeuvre smacked of minibus-taxi-like driver etiquette, which I suppose is why I kept glancing at the bus warily out of the corner of my eye. Somehow, I half-expected its intrepid driver to try overtake me on the right while we both exited the slipway to the left.

It was because I was already watching the bus that I noticed it inching impatiently forward while waiting for the traffic lights to change and the oncoming vehicles to stop. Naturally, I immediately starting hooting. I was still hooting as I watched the bus drive into my car.

Metrobus has been very cooperative in helping me report the accident to its brokers. Apparently I can expect 100% recovery for my insurance provider. No one was hurt (the encounter occurred at less-than-walking pace, after all) and I suppose I have to admit that besides the inconvenience it could all have been a lot worse.

The trouble is, I’ve always believed that bus drivers should be better than other drivers on the road. After all, these are men and women to whom hundreds of thousands of ordinary South Africans entrust their lives on a daily basis. Surely they should be above squashing little cars?

What if BRT drivers behave the same way? Part of the solution to the problem of local, irregulated public transport is the strict controls offered by the BRT system. Taxi owners and drivers are notorious for poor vehicle maintenance and dangerous driving practices but it is expected that once they join BRT, their wayward habits will be curbed. Is this a realistic expectation?

If BRT in particular and the bus network in general are to provide safe, reliable public transport, the authorities concerned need to ensure that the service is tightly regulated and that its drivers operate according to strict guidelines. Based on recent bus statistics – from the continuous impounding of Roadlink buses to the almost kamikaze-like attitude of many bus drivers on the road – I can’t help wondering: are the so-called regulated bus operators and drivers really any better than taxis, and what is to become of our new public transport system if they are not? 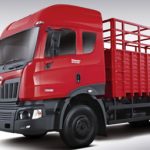 Prev Mahindra Navistar rising
Next Driving under the influence