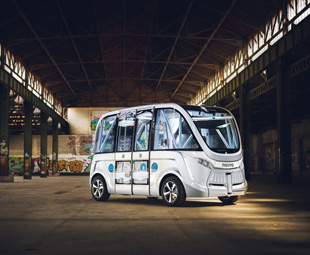 Can you imagine climbing into a bus and noticing that it has no driver? This could soon become commonplace in Japan…

The French electric vehicle start-up, Navya, is aiming to bring its driverless bus to sites such as shopping centres, airports and university campuses in Japan, with the intention of delivering low-speed shuttle services that would run along fixed routes.

With just three years to go until the 2020 Tokyo Olympics and Paralympics, the vice president of Navya, Henri Coron, expressed his excitement over the innovative project, saying that the company aims to connect Tokyo subway stations with Olympic and Paralympic venues using its self-driving buses.

In 2015, Navya completed the manufacture of its driverless bus, which can travel at a maximum speed of 45 km/h and carry up to 15 passengers. Currently, there are 30 Navya self-driving buses operating in a total of seven countries including France, the United States and Switzerland. Testing of two buses is now about to begin in Japan.

In some ways, Navya’s driverless bus is different to self-driving vehicles being developed by conventional car makers. With self-driving cars, there is a need to deliver sophisticated technology that can ensure that the vehicle will always handle its ever-changing surroundings well, even when driving in unfamiliar locations.

In the case of Navya’s buses, however, once the fixed route has been mastered by an operator during a test run, the driverless bus will then remember the exact route. If an unexpected object does suddenly obstruct the route of the bus, the vehicle will pick up on this using its sensors, and an automatic brake will be applied.

Electric vehicles are nothing new to Harrods, the legendary London department store, but now, more than 100 years after it first went the electric route, Harrods is once again returning to electric vehicle technology, with the addition of the 100-percent electric Nissan e-NV200 delivery van. 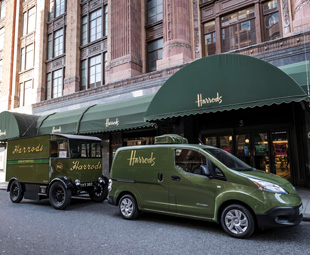 The British department store is the latest business to add a zero-emission Nissan e-NV200 to its fleet. More than 27 000 Nissan electric vehicles have already been sold to businesses across Europe.

The Nissan e-NV200 has been specially adapted to perfectly fit Harrods’s delivery needs. The load space of the van has been fully refrigerated and shelving units added to allow for fresh groceries to be transported in optimum condition. The exterior has also been wrapped in the traditional green and gold Harrods livery to make it recognisable as it travels around the city.

Now Nissan has enabled Harrods to have an all-electric van on its fleet once again – and Guy Cheston, media sales director at Harrods, is thrilled: “It’s wonderful to see an electric Harrods van on the roads of London again. Electric technology has developed rapidly since our old fleet was in operation, and is now a far more sustainable transport solution.

“Nissan is the leader in electric vehicle technology and the e-NV200 was the obvious choice for us, allowing us to easily complete daily deliveries more sustainably and efficiently,” he concludes.

The MAN TGE is born!

We first reported on the MAN TGE in March 2016 after it was revealed at the IAA Commercial Vehicle show in Hannover, Germany. Now, just 13 months later, the first production vehicle has rolled off the assembly line at the newly constructed plant in Wrzesnia, Poland. 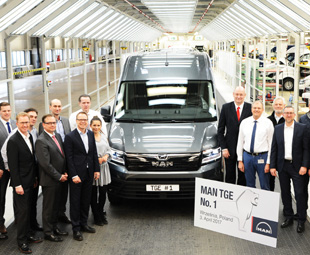 As the first light commercial vehicle (LCV) sold by MAN, the TGE represents the start of a new era for the brand. It was developed in response to the demand from many long-standing customers in the logistics, courier and parcel service, after-sales and trade sectors.

“Our recently established plant in Wrzesnia is setting new quality standards. The vehicles undergo a wide range of quality checks. The dimensional stability of the body shell is checked repeatedly during the assembly process by automated lasers and digital cameras on multiple geometric stations. I am, therefore, delighted to be supplying the MAN brand with a model of such high added value as this first TGE”, comments Jens Ocksen, CEO of Volkswagen Poznan.

Dennis Affeld, senior vice president van sales at MAN Truck & Bus, adds: “We are looking forward to combining the high-quality production standards of the TGE with MAN’s professional sales and service network. We have no doubt our customers will love it. We plan to sell about 20 000 vehicles a year.”

Vehicle VIN number …01, though, is MAN’s own, with Ocksen and Affeld taking delivery of it from the end of the assembly line. It’s a silver van with a short wheelbase and high roof.

Sometimes the chaps Down Under can really come up with some clever ideas (as much as South Africans hate to admit to this). This is one such idea…

Toyota Australia has created a very special Hilux – it’s a full-scale Tonka toy! The concept vehicle was created to mark the high-riding off-roader’s breakthrough in becoming the country’s best-selling vehicle in 2016 (yawn; this is something the vehicle has long achieved here in South Africa). Tonka, a household name, is celebrating its 70th anniversary this year, while Toyota is in its 80th year of incorporation.

The unveiling coincided with the release of Toyota GB’s series of short films, which show Hilux going head-to-head with its tiny Tamiya radio-controlled model counterpart in a series of off-road and performance challenges. 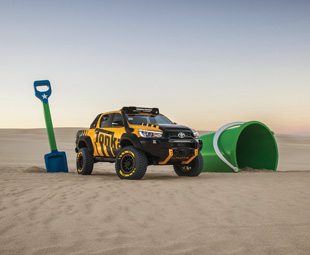 The new concept was designed, assembled and tested by designers and engineers from Toyota Australia’s 150-strong product planning and development division. Product design chief Nicolas Hogios says the extreme style and capability of the Hilux Tonka Concept will capture the imagination of kids and adults alike. “We have taken Tonka out of the sand pit and reinvented the Hilux from top to bottom and from nose to tail,” he says.

“Inspired by the Tonka trucks that kids play with in their backyards, it goes way beyond the already huge abilities of Hilux to traverse rocks and other rugged terrain,” he adds.

“It is also dramatic evidence that our local team loves to have fun; we’re keen to explore new ideas and we’re always looking to push the boundaries of what’s possible,” he explains.

Underneath the dramatic black-and-yellow livery is a top-of-the-range Aus-spec production Hilux – an SR5 double cab with a powerful 2.8-litre turbodiesel engine. The extensive makeover starts with substantially higher ground clearance – an increase in ride height of 150 mm. Combined with a high-riding axle, heavy-duty suspension and 35-inch diameter tyres, the Hilux Tonka Concept is equipped to power over rugged terrain that would be off-limits to conventional off-roaders.

Want to order one? Sorry! You can’t! The Hilux Tonka Concept won’t be coming to a showroom near you any time soon…

Success in Saudi for Merc! (Thanks to a South African)

The truck market in Saudi Arabia may be taking strain, but this hasn’t stopped Mercedes-Benz from doing a cracker of a deal there: the company has just concluded a 540-truck deal!

We can reveal that a certain South African can take a pat on the back for securing this deal. On October 1 last year, Kobus van Zyl (previously head of Daimler Trucks and Buses in South Africa) packed his bag for Saudi, where he is now general manager for National Automotive Industries in Saudi Arabia, a joint venture between Mercedes-Benz Trucks and EA Juffali & Brothers.

“We are so thrilled with this deal. It’s certainly one of the biggest deals ever in our market, and the incredible thing is that all the trucks were sold with service contracts,” he tells FOCUS, in an exclusive interview. 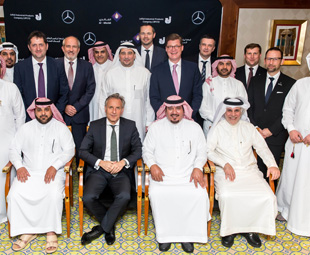 Offering transport services for oil fields, construction sites and the chemical industry since 1972, the Al Khaldi Transport Group ordered the vehicles with a customised support package, including the aforementioned service and maintenance contracts, comprehensive training for drivers and mechanical engineers and a 24-hour roadside assistance guarantee.

Van Zyl attributes the deal to his many decades of working in South Africa. “To be honest, I am so grateful for what I learned in South Africa from our trucking customers and their incredible focus on life-cycle management.

“While this deal is mainly as a result of a fantastic relationship and partnership with the customer, this is definitely the first time that a large Saudi transporter has decided to partner with us to provide maximum truck availability for their customer. It was very good to tell them that I have seen this movie, and the huge benefits, before,” he says.

We have only one thing to say: WELL DONE BOET! 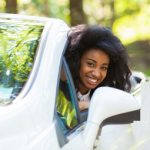 Prev Wake up, SA drivers!
Next A triumphant success! 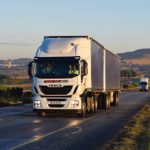