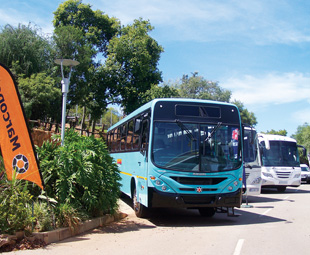 Drugs, road safety and the unrealistic expectations of the Consumer Protection Act were among the issues discussed at the CSIR Conference Centre recently, as DANIELLE DU TOIT reports in the first of her two-part review of SABOA’s 2012 national conference.

There was much talk regarding the Consumer Protection Act at the Southern African Bus Operators’ Association (SABOA) annual conference – with operators still feeling that consumers’ needs are being given greater priority.

Professor Jackie Walters, head of the Department of Transport and Supply Chain Management at the University of Johannesburg, noted that the Act is intended “to promote a fair, accessible and sustainable marketplace” – but contains regulations that are almost impossible for the industry to comply with.

Section 23 mentions that all companies offering a service or selling a product are required to disclose/display their prices. Walters says it will be impossible for an operator, especially larger operators, to display their prices in any one place on any one display area due to the many services they operate and the varying fares charged.

Another industry hit-and-miss is Section 26 – sales records. The Act holds that a supplier of services must provide a written record of each transaction to a consumer to whom services are supplied. The ticketing equipment currently in use cannot meet these requirements. Does government propose putting new ticketing systems in every bus in the country?

Section 63 … well, this was a major point of contention in the open panel discussions. Multi-journey tickets fall under this section. To implement the kind of changes envisaged will require new or expensive changes to current ticketing machines, costing up to R40 000.

Commuter bus operations are contract-driven, and it doesn’t make sense to force operators to invest in expensive equipment, said Walters. Multi-journey tickets cannot expire until the full value has been redeemed or the specified period has passed. Extended validity periods give consumers an incentive and are designed to reduce cancellations, which result in revenue losses. Another upside to multi-journey tickets is that they eliminate the need for drivers to carry cash, which is both dangerous and financially imprudent.

SABOA, Metrorail and Gautrain have decided to tackle the issues the Consumer Protection Act poses collectively. Legal counsel has said some sections of the Act do not apply to the industry. The National Consumer Commission has undertaken to review these claims, but has issued no comments as yet. 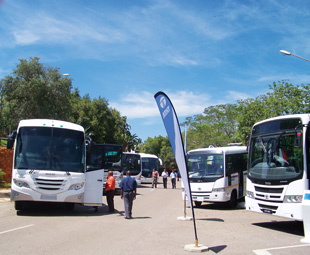 As a transport-related conference, emphasis on road safety was to be expected. Walters said the issue needs to be tackled holistically because it is intolerable that, on average, 39 people are killed on our roads daily.

Interestingly, insurance was brought up in the road safety category, possibly because many of the insured are SMMEs (small, medium, micro enterprises). These operators are keenly aware of the need to prove the roadworthiness of their vehicles when needing to make a claim.

SABOA has submitted proposals that it believes will lower the road accident rate, including the introduction of a road safety summit and a road safety council governed by the Minister of Transport with smaller provincial councils, to the Road Traffic Management Corporation (RTMC).

Licence and permit issues were also discussed, with Walters saying that permits focus primarily on vehicles rather than drivers and operators. He believes there should be sufficient proof that an operator is able to manage a company since this relates directly to their ability to manage a vehicle where consumer’s lives are involved.

Fraud and corruption, especially with regards to the issuing of professional driving permits (PrDP), was another hot topic. A PrDP is required when a vehicle is used for public transport, carries 12 or more people, weighs over 3 500 kg, and/or is a dangerous goods vehicle. These permits are vital for road safety, but are easily obtainable should one know the right person or have enough money. SABOA members have found that drivers with valid PrDPs often fail company tests.

The use of narcotics among drivers, specifically cannabis, is another issue. It was proposed that drivers be regularly tested for both alcohol and drug use.

Further, there should be greater consensus regarding how buses are tested for roadworthiness, especially along the road. Current procedures are subjective and open to interpretation. There should also be a review of the number of testing stations in the country. “In Gauteng, for instance, there is a shortage of testing stations,” said Walters. “This results in capacity issues when vehicles have to be tested.”

SABOA has not yet had any response to its suggestions from the Department of Transport or the RTMC.

Jits Patel, acting chief director for public transportation at the Department of Transport, spoke about the National Public Transport Regulator, which has been established to monitor and oversee public transport and set national standards. It aims to ensure that those who apply for a public transport permit have an operator’s licence and roadworthy vehicles. The Regulator will also be responsible for establishing whether applicants have sufficient maintenance programmes, or adequate and appropriate facilities in which to service their vehicles inhouse. This will no doubt improve bus safety – if implemented.