Even more boere, bakkies and boerewors 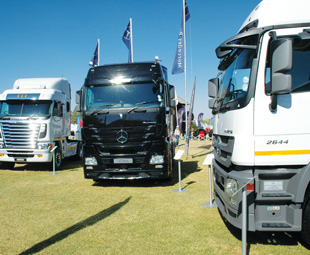 Last year JACO DE KLERK fought off the tantalising smell of boerewors and the alluring 4×4 track to bring you his report … This year, he just fought to get in! Grain SA’s Nampo Harvest Day is booming

It was, once again, before the crack of dawn when the FOCUS team set off to Grain SA’s annual Nampo Harvest Day, which took place from May 14 to 17, just outside Bothaville in the Free State, to see what the agricultural trade show had to offer. And, like the event, our posse also grew, as an Ignition TV film crew joined this year’s parade. (The event was broadcast, along with Truck Test 2013, on DSTV’s Ignition on June 22, 23, 29 and 30.)

With our gang being twice as big this time around, we needed two vehicles for our “pilgrimage” … Fitting, as this year’s show was themed: “Technology for sustainable production”. Ford Motor Company of Southern Africa (FMCSA), once again, generously gave us a Ford Ranger double cab (our original boer-mobile) for the day’s excursion, which was joined by Great Wall Motors’ (GWM’s) H5 Sport Utility Vehicle (SUV).

FOCUS assistant editor Gavin Myers (who handled the TV inserts for the day) and I debated who would drive which vehicle, and I got the SUV.

Admittedly, I had some reservations about the Chinese vehicle, but it soon got its boer on and showed that it has what it takes to be a workhorse in its own right, as we piled all the equipment into the H5 (the Ranger didn’t have a canopy) and set off for Nampo Park. (Check out the sidebar on the second page of this report for more on GWM’s SUV.) 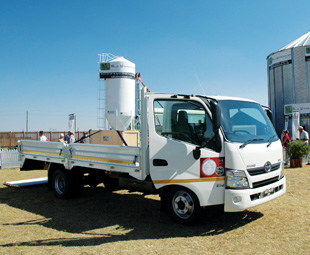 After quite a pleasant drive we got an unpleasant surprise as the vehicles began to queue, in what seemed to be a never ending row, to get into the gates. But, after an hour and a half, we finally set foot on the Nampo Park grounds.

According to Cobus van Coller, chairperson of Nampo’s Harvest Day, this year’s attendance figure of 72 376 confirms that the show is regarded as a growing arena for role players in all the agricultural sectors of southern Africa, Africa and even internationally.

He adds: “In spite of a challenging production year in some parts of the country, the atmosphere at Nampo Park was still one of geniality and friendship. The Harvest Day once again achieved its objective; namely, to create an effective platform for doing business, gathering information, building relationships and even discussing topical matters.”

But the visitors wouldn’t come if it weren’t for the exhibitors. This year, for the eighth time, Nampo attracted more than 600 exhibitors, with 45-plus of these coming from abroad. Grain SA says that the Harvest Day offers an ideal opportunity for international exhibitors to investigate a possible market for their products in South Africa and Africa.

To compensate for the wonderful growth that the show is experiencing, the organisers have commissioned the first phase of an
8 000 m2 expansion of exhibitor space at the southern parking area at the show grounds.

So, with the show booming, it is no wonder that the crowds are streaming to Nampo. We struggled to get in and we had to nearly walk our feet off to see all that the show had to offer. But, our journey was nothing compared to Isuzu’s … .

Before the show, the company took to the road on its “All Roads Lead to Nampo” campaign, a trip through central South Africa to showcase the capabilities and comfort of its all new Isuzu KB, as well as to draw attention to the vehicle’s presence at the show. The journey was launched by Isuzu and regional radio station OFM, in Bloemfontein. 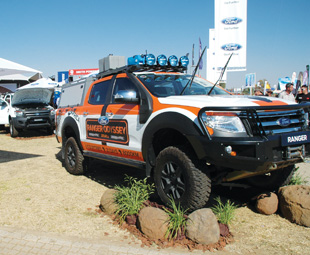 Ian Strauss and Zinzi Mangweni, the Isuzu TV commercial pals, along with Armando Pieters from OFM’s Street Squad, travelled thousands of kilometres in two branded Isuzu Double Cab bakkies, from May 6 to 15, taking on various challenges along the way.

These included: Moolmanshoek 4×4 trail, Drive Out magazine’s “Roll of Honour” Top 10 Winner in 2001 and 2004 to 2006; a little gallivanting at a gravel open-pit mine, where one of the vehicles hauled over a tonne of stones around to show its capabilities; and some of South Africa’s most potholed roads.

After the long journey the vehicles were put on display at the General Motors (GM) stand and tested again on the Nampo 4×4 Track, along with the Chevrolet Trailblazer. GM South Africa’s general marketing manager, Alastair Ironside, says: “We elected to bring along the best off-roaders in our portfolio, showcasing both the Isuzu KB and Chevrolet Trailblazer.”

He adds that GM South Africa has been a part of Nampo for the last eight years. “We always look forward to meeting our customers and sharing their enthusiasm for our products with them.”

But GMSA isn’t the only company excited about Nampo, as the show has also become a significant event on Ford’s calendar. Ford marketing manager, Gavin Golightly, explains: “Nampo provides a unique opportunity for us to interact with the farming community, which is very important to Ford.” He adds: “While the commercial vehicles were the prime focus, we showed many of our passenger cars too, as we seek to cater to the diverse needs of this community.”

However, the commercial vehicle line-up remained the stars at Ford’s stand. A selection of Ranger models were on display in all three body configurations – Single Cab, Super Cab and Double Cab. Notably, the Ranger 3,2-litre Double Cab XLT made motoring history by becoming the first ever bakkie to achieve the maximum five-star rating under the European New Car Assessment Programme (Euro NCAP) crash test protocol (good news for Myers and the camera crew.)

Ford’s Ranger Odyssey edition also joined the ranks before the vehicles embarked on the Ranger Odyssey – an exciting expedition in which 10 challengers take on some of Africa’s most extreme terrains over a three-week adventure, which started this year on June 14. 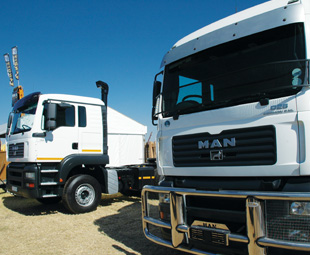 The contestants started out in Kenya, where they travelled through the Amboseli Reserve and the Serengeti en route to the Ngorongoro Crater in Tanzania. From there the challenge took them through Zanzibar, Mozambique and Zimbabwe, with the final leg being completed in South Africa. (A tad longer – and a lot more exciting – than our 200 km trip from Johannesburg to Nampo Park.)

Ford’s new Transit Custom, representing a completely new generation of Ford one-tonne vehicles in the country, also attracted its fair share of attention at the show. “The Transit Custom is a welcome introduction to the South African market,” adds Golightly. “It has proved to be a firm favourite with small business owners and professionals in Europe for many years.”

In 1967, after the first Nampo Harvest Day, the director of the South African Maize Producers Institute, Dr Willie Kotzé, predicted that the show would become famous one day; like the flower festival in Holland, the Rhine festivals in Germany and Windhoek’s carnival … He couldn’t have hit the nail more firmly on its head.

The show has certainly come a long way from its humble beginnings on the farm Donkerhoek – in the Bloemfontein district – where it attracted 200 farmers from the Free State and the then Western Transvaal, to being an international superstar, crowned the biggest agricultural trade show in the southern hemisphere.

It is noteworthy that the show’s goal has remained the same throughout and is still: to create a platform for doing business, gathering information, building relationships and discussing topical matters in and about everything and anything related to the agricultural industry … Bring it on Nampo 2014, we can’t wait to see what you’ll have in store.

Getting there with GWM’s H5

AtWhen it was time for our annual “pilgrimage” to Nampo’s Harvest Day, GWM South Africa generously loaned us an SUV for the trip.

At first glance the interior was an improvement on what is expected from a Chinese vehicle, with another pleasant surprise arising when we found ourselves on a dirt road that you’d typically find around a small town. The H5 delivered sturdy handling and minimal rattles thanks to its independent front and multilink rear suspension.

The seats also ensured a pleasurable drive as they were very cosy and covered in comfortable leather. (Which our aching bodies were even more pleased with at the end of the long day.)

Other luxuries include a reversing camera, a six-speaker touch-screen DVD entertainment system and all the requisite safety features. The rear load compartment even has 10 tie-down points.

Under the bonnet the H5 has a two-litre diesel engine that delivers 110 kW at 4 000 r/min and maximum torque of 310 Nm at  1 800 to 2 800 r/min. A six-speed manual or five-speed automatic gearbox delivers the power to the drive train. 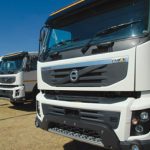 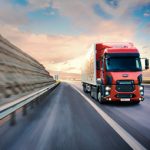