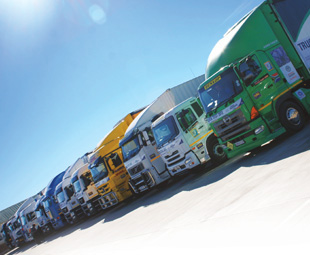 The innovative FOCUS team is celebrating the end of a long, tough but utterly fabulous year. In inimitable FOCUS fashion, the magazine has achieved a number of firsts this year …

There have been many highlights, but the one that was probably most pertinent to transport operators was Truck Test 2012. This was a truly momentous event! “We took 18 extra-heavies from Johannesburg to Durban and then back again,” relates Charleen Clarke, editor of FOCUS. “The purpose of the exercise was to establish real-world operating conditions. It was not a competition, but rather an accurate test of actual costs – in the real world.”

The results, which have been widely publicised and are available on the FOCUS website (click on http://www.focusontransport.co.za/features/the-latest-features/111-featured-july-2012/966-aint-no-mountain-high-enough.html), <http://www.focusontransport.co.za/features/the-latest-features/111-featured-july-2012/966-aint-no-mountain-high-enough.html),> are invaluable to transport operators. “When you’re investing millions of rands in trucks, it’s good to have reliable, accurate and independently-sourced operating costs,” notes Clarke. “And Truck Test 2012 achieved exactly that.”

Planning is well under way for Truck Test 2013.

A second highlight of the year was handing over a Mazda5 to the Salvation Army. The vehicle was purchased by FOCUS using funds raised by the Caring Truckers Aids Drive. This charity, administered by FOCUS magazine and supported by the entire transport industry, aims to alleviate the plight of children affected by the Aids virus. 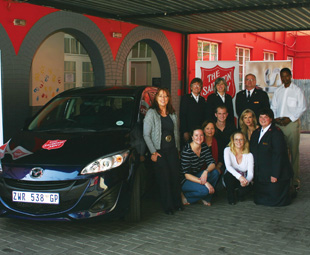 The vehicle was handed to the Ethembeni Babies Home in Johannesburg, and the team there was ecstatic with their new set of wheels. This haven for abandoned babies, some of whom are HIV/Aids-infected, was in dire need of a vehicle to ferry babies and toddlers, particularly those who need antiretrovirals (ARVs), to hospital. As such, the home’s administrator, Captain Heather Rossouw, was over the moon with the donation.

The Caring Truckers Aids Drive was initiated in 2000 by FOCUS in conjunction with Bridgestone. Since then, thanks to the generosity of the caring members of the transport industry, it has touched and changed countless lives.

A third highlight was the publication of EduTrans, a career guide that aims to alleviate the skills shortage in our industry.

The skills shortage in the wheels game is troubling, with too few young people coming into the industry. Enter EduTrans – a funky 68-page book showcasing careers in the automotive and transport sectors. Conceived, created and produced by Charmont Media, it unashamedly aims to nudge youngsters into the transport arena.

The automotive and transport sectors are hungry for skills and talent – but today’s youngsters seem to be looking elsewhere for career fulfilment, and that’s a problem. The team at Charmont Media, publisher of FOCUS, decided to do something about it. 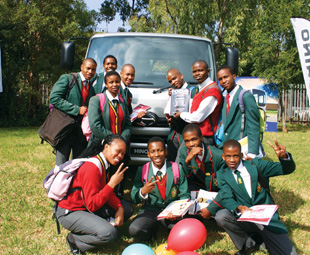 “Education and transport belong together,” says publisher Tina Monteiro. “The sector needs informed, educated job applicants, and prospective applicants need to have a better idea of just how much the industry has to offer. There are some incredible career-path plans already laid out in this arena – and the sooner today’s kids get to see those paths, the sooner they might decide to get on board and follow them.”

A fourth highlight was the launch of the magazine’s very own television programme! Motor Trends – FOCUS on Transport aired this year on Ignition, and the feedback was extremely positive.

The first show focused primarily on Truck Test 2012 while the second featured the IAA as well as MAN’s Consistently Efficient Tour.

The television show reached hundreds of thousands of South Africans who are not normally exposed to the transport industry.

“We believe that, in order to remain at the top of our game, we have to be innovative,” explains Clarke. “As such, we are constantly coming up with new ideas. Truck Test 2012, the FOCUS newsletter and the FOCUS television programme were among those ideas for 2012.”

Naturally, the FOCUS team has some innovative concepts up its sleeve for 2013 – commencing with a golf day on Valentine’s Day, which will raise funds for EduTrans. Watch this space! 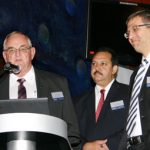 Prev MAN-sized year
Next Looking ahead to 2013