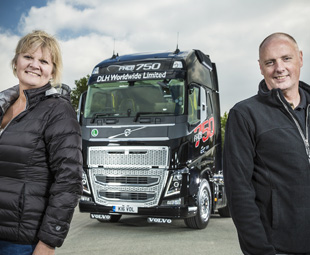 Owner-driver Mike Boyd and his partner Caroline Gardner originally planned to get married in 2016. Unusually, their wedding list included a new Volvo FH16, which they were planning to order in time for it to be at the ceremony.

A visit to this year’s Truckfest at Peterborough, in England, resulted in a change of plan, however, when they saw the new Euro-6, FH16-750 on the Volvo Trucks stand.

“We were originally going to get married in 2016, and we wanted to have the FH16 at the wedding,” says Mike. “But when we saw the new FH16-750 at Truckfest, we were so impressed that we decided to order one then and there.”

He adds that they also brought the date of the wedding forward to September 13, this year, so that they could have the new truck at the ceremony on Oldshoremoor Beach, Kinlochbervie in north-west Scotland.

“After the wedding, we used it to take us on a tour round the Highlands and islands of Scotland on our honeymoon.”

When not touring the countryside on honeymoon, Mike delivers industrial gases to factories in Germany and Switzerland. He has been a truck driver for 34 years and has been a sub-contractor for freight forwarder DLH Worldwide (no, not DHL …) for the past three years. 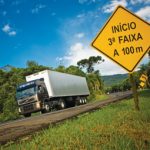 Prev Lending a (mutual) helping hand
Next Taking the lead 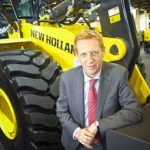