Introducing Lion’s Explorer 2: the next generation 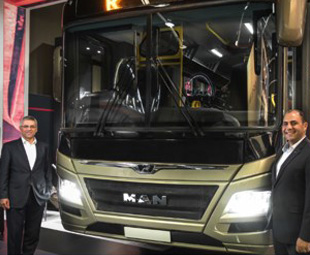 MAN Truck & Bus South Africa launched the second-generation Lion’s Explorer bus to operators at the Southern African Bus Operator’s Association (Saboa) conference yesterday. The project, which has been quietly running for a year and a half, has been completed with the aid of MAN colleagues in Germany – meaning the Lion’s Explorer 2 now fits in completely with the European range of Lion’s family vehicles.

“We now have a fantastic product range, starting with the Volkswagen 17.210 to the double-decker RR9. Nobody can provide such a product range in this market,” says Markus Geyer, MD of MAN Truck & Bus SA.

According to Philip Kalil-Zackey, head of bus at MAN Truck & Bus SA, the Lion’s Explorer 2 shares some commonality with its predecessor, such as the chassis, drivetrain and windscreens. However, there is much more new than old…

“There has been a complete restyling of the front and rear ends. This has enabled us to improve aerodynamics and lower the drag coefficient, which improves fuel consumption,” he explains.

“Big, bonded windows give it a definite coach look, like a luxury bus. The structure is 3CR12, which is both light and corrosion resistant,” he adds. “Other unique features as standard are inswing doors, new interior panels that are more customer friendly and a smaller driver’s door (which is still one of the biggest in industry),” he adds.

The smaller driver’s door is significant, as it has allowed the engineers at MAN to raise the engine’s air intake for buses that run in off-road conditions.

The 65 passengers will not be left wanting, either, as the redesigned interior features USB chargers at all seats and overhead parcel shelves. There are also full luggage lockers in the wheelbase and a rear boot.

Kalil-Zackey adds: “From a safety point of view we have LED daytime driving lights (the headlight cluster is from the MAN TGX) as well as anti-lock braking, the latest electronic braking system (EBS 5), and an integrated Voith retarder. We can also add many other options, such as park distance control, camera systems and driver enclosures.”

The first Lion’s Explorer 2 units will roll off the MAN Truck & Bus SA Olifantsfontein production line by the end of June. 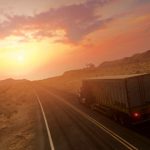 Prev Trailer safety is vital!
Next An air of calm 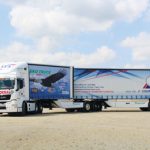