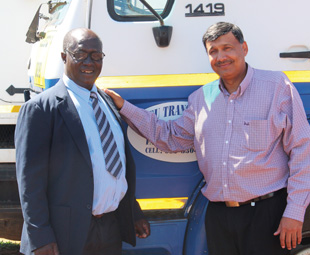 With the help of Murray & Roberts, two entrepreneurs in Johannesburg are proving that nothing is impossible. LIESL FRANKSON spends a day finding out what they’re all about

Its 12:30 on a warm afternoon and the visitors are excited to leave the sleek Murray & Roberts building in the middle of Bedfordview, to meet two visionaries, who can be found far from this corporate skyline.

Off a dirt road in Vosloorus, the two taxis pull into a yard. Waiting at the door to welcome everyone, dressed in a white shirt and navy blue suit with the Leeu Transport logo stitched onto the breast pocket, is Andries Ndlehe.

His entire house has been converted into an office space, which includes a small human resources (HR) department where his youngest daughter works alongside another HR practitioner. The finance department is set up in what used to be one of the bedrooms and so is Ndlehe’s office. Detached from the main house is the boardroom where Ndlehe takes a seat to share his story.

Most people approaching 70 would already have been applying the brakes for some time, as they prepare to enjoy their golden years. This is not the case for Ndlehe, owner and driving force behind Leeu Transport.

In 2002, Ndlehe was retrenched from his position as a driver at a company where he had worked for 25 years. The business went into liquidation, leaving its entire staff in the lurch.

Ndlehe saw the situation as an opportunity to start his own transport business. He used his severance package to buy the truck he had driven for 12 years, from his former employers, and so Leeu Transport was born.

“When the company closed down, I asked myself what I was going to do, because no one was going to employ me due to my age. I asked the liquidators how much my truck was worth and they told me to put in an offer.”

Ndlehe says most people at the auction were unaware that he was a registered buyer. The more they asked him (as the driver) about the state of his truck, the more he told them it had endless issues. This crafty move allowed him to walk away with his first truck and trailer for R160 000. 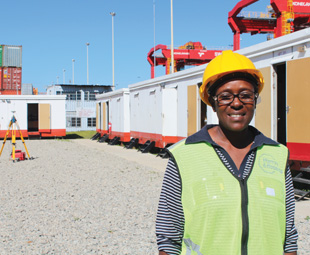 In July 2002, Leeu Transport was registered and ready to hit the road. A year later Ndhele managed to get a contract that secured him work for the next six months and he was able to buy a second truck. The push he needed, to take his business to the next level, came in 2009 when he became part of the 24 companies supported by the Murray & Roberts Enterprise Development Programme.

This was the turning point for the business. Ndlehe explains that operating as an independent transport contractor is exceedingly difficult without partners such as Murray & Roberts. Today Ndlehe owns 19 trucks and 17 trailers, which he uses to transport machinery and structural steel for a number of customers, particularly in the mining industry.

Leeu Transport’s turnover went from R250 000 in 2009, to over R11 million and Ndlehe is determined to continue growing the company. “I’m very grateful to Murray & Roberts for the help it has given me,” he says. “It has helped me tremendously to grow my business. But this growth is not yet finished. Through this support I am planning to expand into transporting into the rest of Africa.”

Leeu Transport is not Ndlehe’s only source of income. He also rents out a section of the land he now owns behind his offices to a nearby power station that uses it to store its steel. Not forgetting where he comes from, Ndlehe has cows, sheep and chickens roaming his property as well.

Sheldon Mayet, who is in charge of Enterprise Development at Murray & Roberts, says Ndlehe was chosen to be part of the programme because of his passion and willingness. “His story is so inspiring; for someone with a standard two education he proves that anything is possible.”

“Hard work and commitment is what you need to succeed; you’ve got to push and be hands on in your business. I know where I came from and sometimes I can’t believe where I am,” concludes Ndlehe.

As the smartly dressed Leeu Transport staff, led by Ndlehe, wave goodbye, the taxis reroute for the next destination; the City Deep Inland Port. It’s here, at the largest inland port in the country, that Stephina Van Rooyen can be found.

The group files out of the taxis and into one of the prefabricated site offices. After a few minutes, Van Rooyen appears dressed in jeans, protective shoes, a hard hat and a neon vest that reads: “Think. Stop. Act. 24/7.”

Van Rooyen’s story is compelling, especially because she entered the industry with no experience and little more than the passion she felt for it. She started off by completing a brick-laying course in 1997, having previously specialised in selling African art and cosmetics.

“I used to sell curios at the Pretoria zoo and then later cosmetics in town. One day, while at the hair salon, I heard about women in construction. My friend and I wanted to get involved. We heard that courses were being offered at shaft 17. When we got there, I chose to do brick-laying.”

Van Rooyen has consistently upgraded her skills through ongoing training and development and is today a Grade 3 member of the Construction Industry Development Board. She is registered with the South African Federation of Civil Engineering Contractors, and is a member of the National Association of Women in Construction.

Van Rooyen partnered with Murray & Roberts in 2000 and has since been involved in numerous road and steel construction projects. The most prestigious of these was as one of the subcontractors on the Sandton Gautrain Station.

“Being a woman in the construction industry is not easy,” she says. “I would not have been able to get this far without this support. Most of my friends who started in construction have failed, but, thanks to the lessons I have learned about their experiences and the advice I receive from my mentors at Murray & Roberts, I have managed to prevail.”

Not satisfied with resting on her laurels and letting her larger partners take on all the responsibility of developing the sector, Van Rooyen is actively involved in helping to develop other emerging women in construction.

“We need more women in the industry, but they must have a passion for it and they have to be hands on. It is a tough industry to be in and women must not be ashamed to participate in it,” she says.

The technical and professional mentoring and support Murray & Roberts provides to Ndlehe and Van Rooyen, together with their own hard work, determination and perseverance, has seen these two grow their dreams from strength to strength. 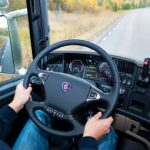 Prev Back to school
Next Truck Test: the next era