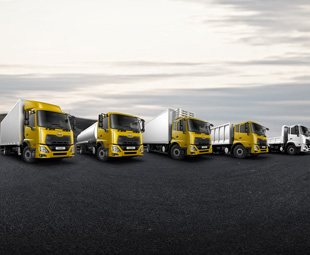 UD Trucks Southern Africa launched its new Croner range of trucks earlier this week. Specifically developed for the company’s growth markets and aimed at the heavy commercial vehicle (HCV) segment, the range offers 13 variants and up to 21 customisable configurations between 9,5 and 17-t gross vehicle mass (GVM).

The range of wheelbase variants can be configured to suit operators’ specific needs, with flexibility in everything from GVM and wheelbase choices, to cab, driveline, axle and suspension.

Briefly, new four- and six-cylinder engines (of five- and eight-litre capacity, respectively) have been designed to produce high torque of up to 1 050 Nm, aiding driveability and efficiency.

The engines are paired with a selection of six- and nine-speed manual and automatic (Allison) transmissions. The automatics also feature a direct-coupling “lock-up” function for enhanced fuel efficiency and performance.

All Croner models are equipped with a built-in fuel coach – an onboard display that gives driving instruction in real time with the aim of improving driving behaviour and efficiency.

According to UD, the Croner leads in terms of front- and rear-axle loads and capacities. Both axles are built extra tough to enable heavy loads and extended oil-change intervals. All models are fitted with a rear-axle multi-leaf spring, while air suspension available on the 16-t variant.

The cab has been designed to improve aerodynamics by five percent over the outgoing model. Inside the cab, drivers are catered for with an open, ergonomic design that prioritises comfort and reduces fatigue.

To make good on all these claims, durability testing was conducted over an equivalent of three-million kilometres around the world. In addition, 1,4-million kilometres of field tests in actual customer operations were carried out across six countries (including South Africa) over a period of 18 months.

“We wanted to develop and deliver a smart and modern HCV truck with ultimate dependability. The Croner is built with a vision: To create a truck that will help our customers optimise the use of time, to make every moment count,” says Toshi Odawara, vice president of product management at UD Trucks.

Look out for the full launch report in the upcoming August issue of FOCUS. 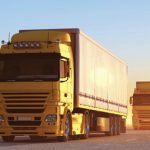 Prev Driverless trucks: what about the drivers?
Next Iveco Madrid takes gold 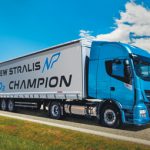