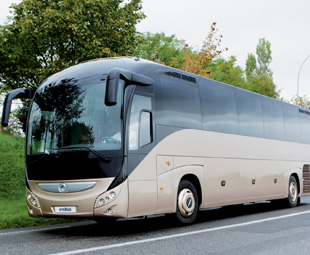 The scintillating and utterly sensational island of Sicily was the venue for the launch of Irisbus Iveco’s Magelys Pro coach. CHARLEEN CLARKE headed for this island – incredibly rich with culture and history – to experience the new coach first hand.

Oranges, olives and the mafia are synonymous with Sicily. So that’s pretty much what I expected to experience when I got there. And I most certainly did. Well, two out of the three anyway, although I did see a rather dodgy character in the ancient town of Siracusa (located near the south-eastern corner of Sicily on the Ionian coast and also know as Syracuse). This utterly fabulous town is built on an ancient Greek settlement founded by Corinthians in 734 BC.

But I got so much more than I expected. I also discovered that Sicily was a treasure trove of history. This enchanting island –where Archimedes taught and Saint Paul preached – was a Greek colony, a Roman province, an Arab emirate and a Norman kingdom. The Phoenicians, Carthaginians, Swabians, Angevins, Aragonese and Jews made this unique island their own, leaving behind an eclectic history. I cannot wait to return and experience more.

I also got to experience a treasure trove of coach technology, in the form of the new Magelys Pro.

But, before I get on to the new coach, some background. Magelys has established itself as an undisputed leader in the highly specialised grand tourism coach segment on the strength of its high-end services. Since March 2008, almost 250 Magelys HD and HDH (the higher three-axle version) have been produced at the Irisbus Iveco works in Annonay, France.

Available in three different lengths (12,2 m, 12,8 m and 13,8 m) and two different heights (3,62 m and 3,81 m), the Magelys family is now gaining a new member in the form of the Tourism version Magelys Pro. With this new model, Irisbus Iveco is targeting a significant stake in the multi-purpose tourism coach segment, which represents the heaviest demand on the European market.

The Magelys Pro was designed specifically for touring and tourism, which is why it was launched in Sicily – the island being a tourist’s paradise. 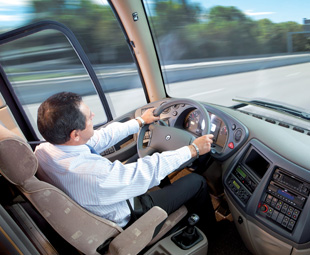 With its sleek silhouette, it’s a real beauty. But it’s more than just a pretty face; it offers a host of practical advantages, too (such as good performance and optimised fuel consumption).

But first the pretty stuff. I loved the front end – with its LED lights. The lower part of the panoramic windscreen is made from aluminium (as opposed to glass) and may, optionally, be painted the same colour as the bodywork. The driver door has been replaced by a window bay composed of one fixed, double glazed panel and another, electronically-powered panel that opens up.

The interior is light and airy and, given the fact that it features more glass than a PG factory, the passengers can admire monuments, attractions and landscapes… or whatever else catches their eye… without anything obstructing their view, not even momentarily.

The reclinable velvet-covered seats are extremely comfortable and boast an optional fold-down tray table. Besides offering ample space for passengers to stow away their bags or personal belongings, the luggage racks are equipped with consoles that control the reading lights, individual ventilators, speakers and call button.

It won’t be coming to South Africa – which is such a pity. But hopefully some of our readers will get to enjoy it when they are touring Europe one day… 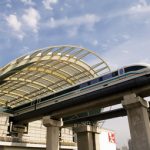