Sing it with me… 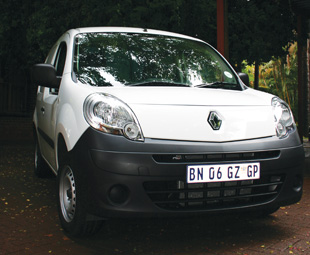 If GAVIN MYERS were to ever buy a new Renault Kangoo Express, he may just find himself deciding on a career change to suit. Postman Pat, Postman Pat, Postman Pat and his black and white … Renault Kangoo, actually! Aah yes, one of many deeply recessed early childhood dreams resurfaced when I received Renault’s new Kangoo Express panel van for test a few weeks back. As a child, I would watch episode after episode of our friend Pat – and his black and white cat – dreaming of whirring around in the many Royal Mail vehicles he had at his disposal.

More often than not, early in the morning, just as day was dawning, he’d pick up all the postbags in his van.

Okay, sure, my van wasn’t bright red. And my (20something-year-old) friends more laughed than smiled as I waved to greet them – which is how, much to the amusement of all, I acquired the nickname “Postman Pat” for the week. And subsequently had the theme song playing through my head every once in a while too! You’ll have to forgive me if I’ve just put it into yours.

But in all honesty, it’s not without good reason. While the old Kangoo had more in common looks-wise with Pat’s boxy little van (based on an ancient Bedford HA, according to Wikipedia), the new Kangoo is much more of a looker. And while it looks small, it would no doubt be rather fit for the job. Any job, actually. 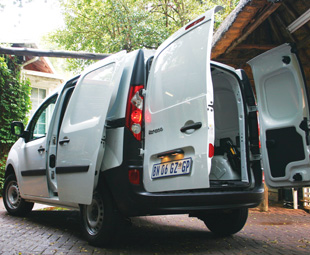 This cute little guy hides some impressive credentials, among them a rubber- and plastic-lined load bay offering an 800 kg payload; 3 m3 load volume; and dimensions of 1 476 mm x 1 218 mm x 1 251 mm (length x width between wheel arches x height). There are asymmetrical rear doors that open 180 degrees, as well as a passenger-side sliding door (there is a protection frame behind the driver’s seat). Loading and unloading of awkward and vulnerable items such as a fridge and paintings was a simple task –  “Postman Pat” was helping a friend’s younger sister move from Joburg to a commune in Pretoria ahead of her first year at Tukkies.

Unfortunately, the Kangoo’s 64 kW, 128 Nm, 1,6-litre, eight-valve petrol engine is a little breathless at the best of times, and the matter of getting up to speed or regaining speed can best be described as lethargic. However, once up to cruising speed the Kangoo pulled the load (albeit nowhere near the full 800 kg) along well. Still, a diesel engine would certainly be a worthwhile addition.

This is also because of the fuel penalty imposed by revving the engine to gain and keep momentum. Renault claims a combined fuel consumption figure of 8,2 l/100 km, but we could only achieve closer to 11 l/100 km – as per the vehicle’s on-board computer. The manufacturer also claims CO2 emissions at 194 g/km.

Otherwise, the Kangoo is a rather nice vehicle to drive. Its seats are comfortable and the vehicle rides well (it seems well-sprung to offer good comfort as well as manage a load). Road-holding is also good and, as is generally the case with French vehicles, the Kangoo has reassuringly strong brakes. Further to this, the Kangoo comes standard with ABS and EBD. It was therefore of little surprise to find out that this new-generation Kangoo is in fact built on the same chassis as the Renault Scenic.

Typically-Renault is the well-built, spacious, functional, uncluttered, cabin. There is a plethora of storage space within the cabin. However, I found it a bit perplexing that the overhead shelf had spaces in it through which smaller objects could easily fall once the sun visors were called into use. These themselves were also, in actual fact, of little use if the sun attacked from the side, as the aforementioned shelf prevents them from being put up to the window properly. The feature list extends to a driver airbag, remote central locking with alarm and immobiliser, air conditioning and a full multi-function on-board computer. A Sony MP3 radio is available as an aftermarket dealer fitment.

For the moment, there is just this one model, for which you will pay R164 900. Included in the price is the Renault Confiance package, including a three-year/60 000 km service plan, five-year/150 000 km warranty and 12-year anti-corrosion warranty.

I have a feeling that if there was ever to be a modern-day take on Postman Pat, a Renault Kangoo would be his vehicle of choice. Because, as all the birds are singing and the day is just beginning, Pat would feel he’s a really happy man.