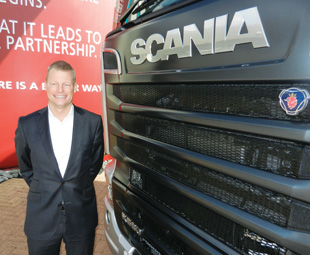 Scania has a stated goal: the company wants to deliver 120 000 trucks a year by 2020. CHARLEEN CLARKE chats to Henrik Fagrenius, senior vice president southern Africa, Asia and Oceania at Scania, and discovers that South Africa will play a key role in achieving this goal.

Scania sold 61 051 trucks last year – which puts the 120 000 goal into perspective; 100 percent growth is quite some challenge. But Fagrenius, whose region is expected to deliver much of this growth, is not too fazed. “We believe that mature markets such as Europe will recover and emerging markets will continue to grow and develop. South Africa is, of course, one of those important markets. We see big growth in the region for which I am responsible – especially Thailand, Australia and South Africa,” he tells FOCUS.

The African, Asian and Oceania regions are currently small yet significant. “Africa and Oceania accounted for seven percent of total sales last year, with Asia responsible for 10 percent,” Fagrenius reports.

Elaborating on the Asian market, Fagrenius says that Thailand holds considerable potential. “The 16-tonne and above market is growing. We have less than a one percent share at the moment, so there’s lots of room for improvement,” he reveals.

“Myanmar has also become a very big bus market for us. We are selling a lot of mining trucks in Indonesia and we have a successful non-captive dealer there,” he comments. (“Non-captive” means that the dealership is independent and thus not owned by Scania.)

The Korean market, on the other hand, has its challenges. “The Korean Free Fair Trade Council is claiming that we discussed pricing with competitors in 2007, and it appears as though a substantial fine will follow. We may appeal once we get the final written sentence and, in the meantime, we have implemented serious educational measures,” he tells FOCUS.

The company has been considerably more successful in the Australian market. “We have a share of around five or six percent. Long haulage is growing, and there is a lot of fleet business there,” he notes.

But, Fagrenius truly becomes animated when examining the African market. “I am thrilled with our performance here in South Africa. We have a very strong organisation and captive service network here. The market is growing and so too are we. We have grown our market share from 7,7 to 10,3 percent this year. We have a good position in Namibia, Botswana, Tanzania and Kenya, and now we are starting up in Mozambique. There is healthy growth in all these countries; they will account for a substantial part of the company’s growth towards 2020,” he predicts.

Of course there are challenges in this continent in general and South Africa specifically – not least of which are our volatile labour market and fluctuating currency. But neither bother Fagrenius. “Of course the strikes in South Africa have been problematical for GDP growth … but I don’t have sleepless nights about this. And when it comes to currency issues? Well, we have seen this in a lot of developing countries. It is not unique to South Africa. Of course we hope that it will stabilise and that the Swedish Krone won’t get any stronger …” he shares.

He says South African customers can expect an increased focus on the driver. “A good driver can influence the fuel consumption by up to 15 percent. We want to help drivers to achieve just that through training,” he says.

The product range won’t change, and don’t expect multi-franchising either. “We are a one-brand company and we will continue to focus on the heavy side of transport. We will grow with the market but, of course, that won’t be enough. We have to take market share. In South Africa we have shown that it is possible. We will repeat this exercise in all the regions for which I am responsible,” Fagrenius reveals.

Ultimately, Fagrenius accepts that the 120 000 goal could be perceived as daunting. “There are a lot of good trucks out there; we have a lot of competition. But we have a very strong captive service network with a high level of quality. We have an in-house finance company and we are in control of our service network. I believe that we will be able to offer customers the lowest total cost of ownership, and that this will be our key to success. After all, when our customers are profitable then we are too …” he concludes.

It all sounds pretty simple, doesn’t it? 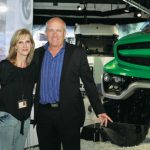 Prev Public transport, not public disgrace
Next The banker who made it BIG 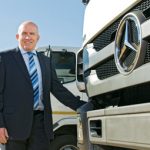