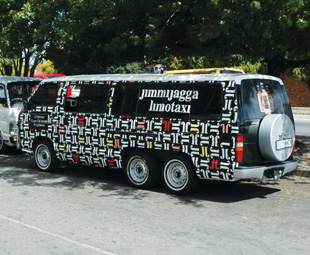 As we approach the Randburg taxi rank, I get to see first-hand just how brilliant the Jimmijagga limotaxi is at getting people to change their minds about things, says SEAN PARKER.

From “Will it stop?” as the ordinary-looking Toyota HiAce minibus taxi approaches to “What the – ?” followed by howls of laughter as the six-wheeled stretched limotaxi pulls up, the reactions of passers-by to the lunacy of a limotaxi made my day.

The Jimmijagga limotaxi – its name is almost as long its wheelbase – is the first of its kind in the world, and a living, moving advertisement for a fusion wine spritzer from KWV called Jimmijagga.

Gareth Haarhoff, innovations director at KWV, explains that Jimmijagga is the first fusion wine spritzer in the company’s ready-to-drink (RTD) category. “We wanted our advertising and brand experience to be just as innovative as the product. This is a brand that targets the lighter side of life in South Africa and always looks at things from a slightly different angle. We tasked our creative team to find ways to add a twist to the ordinary.”

The agency behind the limotaxi concept is Mbongiworks. I asked founding partner Thurlow Hanson-Moore how it became a reality. “The vehicle had to express the idea of putting the extra into extraordinary,” he says. “So we asked ourselves: what is the most ordinary vehicle out there? It had to be ordinary and it had to have a purpose, but it still needed to have attitude and personality. The first thing that came to mind was a taxi.”

Then came the task of adding a twist – or “changing up the everyday”, as Hanson-Moore puts it. So what has been done to convert an everyday minibus taxi into a chic limo that oozes sophistication while hitting the funnybone? The team set out to find a good quality Toyota HiAce with just 30 000 km on the clock. Not easy. Finding a good example was a monumental task. “They are incredibly scarce,” says Hanson-Moore. “People snap up the good ones quickly.”

Tenacity paid off, and the agency’s new-found pride and joy was then taken to limo builders Mehano.

The people at Mehano were apparently bemused to see a minibus taxi in their workshop – and a little hesitant because it wasn’t a Hummer or the usual kind of vehicle they’re used to pimping. Mehano was chosen because of its experience working on Toyotas. It has fitted many an extra cab onto Land Cruiser bakkies.

“They were great,” says Hanson-Moore. “They took on the challenge because they thought it was interesting and different, and got quite excited about it. They stretched the vehicle, adding about a metre and a half. They fitted an extra trailing axle as well as an extra set of wheels, which was purely cosmetic. They also converted the interior, putting in an L-shaped seating arrangement and a TV; the usual kind of limo trims.”

Mbongiworks had a lighting system installed to enhance the limo effect, but did it in limotaxi style with a mirror ball and a light that lights up the mirror ball. To keep things fun, the creative team worked in a home-made feel – and it did hold back in places. The idea to line the roof with mirrors, for example, eventually made way for standard vehicle carpeting.

Party on the move
The limotaxi has an concert-spec sound system that can be used for shows – it’s a massively powerful system, complete with microphone and speakers that can be taken out of the vehicle. You can run the limotaxi as a stage, and even DJ off the sound system.

But it’s the extra set of wheels that has the most impact. “We used the white-walled tyres that you see on everyday taxis,” says Hanson-Moore, “but there are six of them.” 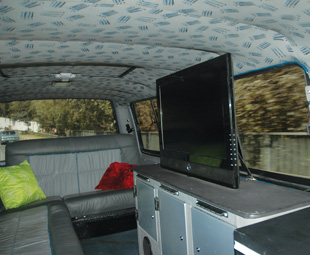 What’s great about the vehicle is that when it’s viewed from the front it looks like any other taxi. “We often have people signalling the vehicle as it approaches, then getting shocked when they see what it looks like from the side,” says Hanson-Moore. “The best reactions happen at taxi ranks – everyone thinks it’s hilarious. The big question on everyone’s lips is how many passengers it can take.”

KWV has asked Mbongiworks to build a second limotaxi. “It’s a real pity this didn’t all happen in time for the Soccer World Cup,” says Hanson-Moore. “A fleet of limotaxis would have been awesome as a World Cup gag.

“It’s an incredibly powerful idea,” he adds. “A lot of commuters love taxis more than you can believe, and wherever this one goes, it starts a conversation. It gets people engaging and laughing. It also attracts the higher LSM or richer kids, because they get the gag; they like the joke.”

In the brief time I spent with the Jimmijagga limotaxi, it was clear to see that it’s a hit with everyone. Mbongiworks has managed to fuse two cultures into a product that epitomises cool while serving a purpose. It’s definitely given us a new take on pimping cars. Who needs a stretched Hummer anyway!

* Parker is the South African Guild of Motoring Journalists’ intern for 2012 and spent a month working with the FOCUS editorial team. 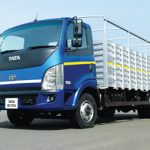 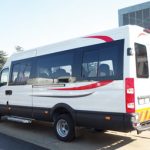