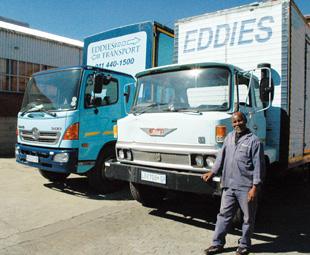 There’s no denying the allure of a shiny new cab and a more powerful engine. Truckers are drawn to them like bees to a honeypot. But, apart from the fond memories it brings to mind, a truck that has stood the test time and is still going strong is indisputable proof of durability and reliability.

Tucked away in a removal company’s yard in Kew sits a 1982 Hino KR 360, the forerunner to Hino’s popular 500 Series. The 30-year-old truck isn’t a forgotten relic in the corner, however: it’s the spare truck for Eddies Transport, a local removal company that has been operating in and around Johannesburg for over 50 years.

“When we bought Eddies Transport seven years ago, we inherited a fleet of Hinos that had been purchased in the early 80s,” says Liam Bayley, international operations manager, Bayley Worldwide Removals. Since the merger of Eddies Transport and Bayley International Removals, each company has maintained its core functions: Eddies caters for local, Johannesburg-based removals, with Bayleys specialising in the international market, and warehousing.

“The Hinos were far from being on their last legs, but we recognised that we needed to begin replacing the fleet with new models,” he continues. “New Hinos come with service warranties, their cabs are more comfortable and ergonomic and they are incredibly fuel- efficient, so it was only natural that we wanted to upgrade our fleet. But when the time came to decommission the last truck from the original fleet, we couldn’t do it. It still ran perfectly, so we decided to keep it as a spare truck instead.”

Parked in a corner of Eddies’ yard, the KR 360 had not been used or even started in months. No problem for the ever-reliable Hino! A quick change of battery was all that was needed to get the engine turning, and the old lady started first time. “The engine sounds healthy, and the exhaust doesn’t belch fumes,” Bayley points out, as Petrus Mbatha, a veteran Eddies driver, began manoeuvring the truck from its parking spot.

“In fact, if it wasn’t for the bonneted cab and the obvious age of the truck, you could hardly tell it was a thirty-year-old veteran of the removals industry,” he adds with a smile.

The sheer tenacity of the truck is one of the reasons why Eddies, and now Bayley Worldwide Removals, has stuck with both the Hino and Toyota brands over the years. “The Hino 500 is the perfect truck for our industry,” Bayley explains. “It’s got a fantastic turning radius, which makes it easy to manoeuvre around residential areas and complexes; it’s a tough, hard-wearing and durable truck, which is important in the stop-start conditions we operate in; and it’s very fuel-efficient.

“The fact that Eddies continued to operate with the same fleet for almost 30 years says a lot about Hino’s longevity and reliability, too,” Bayley concludes. And he’s absolutely right: she may no longer be gleaming and new, but the KR 360 tucked away in that Kew transport yard is a shining example of what it means for a truck to be a real workhorse. 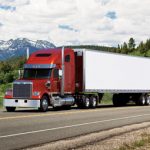