Voyage to the bottom of the sea (well almost…) 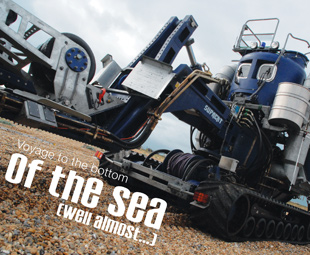 Here in the UK, I live near North Norfolk’s picturesque coastline and less than ten miles from Wells-next-the-Sea, a favourite haunt for ageing shed draggers (a colloquial term for people who tow caravans) from London’s low-intellect overspill into Essex. I only mention that because the Supacat machine played with here was at Wells for trials just three months before I wrote this article. Trouble is, not being elderly and from Essex, I didn’t know that… And that’s why I had to drive all the way to Dungeness to get my hands on it.

First things first, though: I had to find out where Dungeness is. Turns out it’s the headland of shingle beach on Kent’s Romney Marsh. The Dungeness label is also given to a scattering of dwellings along the beach, and – at the same location – to one of an ever-increasing number of Britain’s so-called “important ecological sites”.

For those who care – and I’m definitely not one of them (remember, I’ve been there) – Dungeness is one of the largest expanses of shingle in the world. “Wow!” It’s apparently also home to over 600 different types of plants; a third of all those found in the UK, actually. “Double wow!” And – according to Wikipedia – it’s one of the best places in the UK to find insects such as moths, bees, beetles and spiders; many of these being very rare and some found nowhere else in Britain. Hmmmm… I wonder if this insect-thing has anything to do with those nuclear power stations dominating the local skyline? By the way, I’m no fan of nuclear power, preferring anything nuclear to be packaged as a bomb or missile. At least that way you have a degree of control over where you let the stuff loose…

Anyway it’s approaching 200 reactor-leak-diluting miles (by road) from Wells-next-the-Sea to Dungeness; and during my early-morning journey there, the only thing of note that happened (a pre-emptive pun) was radio DJ, Terry Wogan’s, announcement that Flabby Spice’s version of Petula Clarke’s 60s hit “Downtown” was to be the official song for a BBC television series. 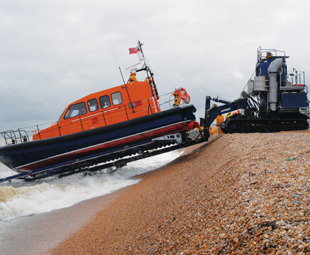 Wogan then proceeded to play it. Oh dear, sometimes it’s best to leave well alone… I’m no fan of Petula Clarke, but enduring Flabby Spice’s tuneless, monotone re-hash highlighted very clearly the differences between what it required to be a singer in the 60s and what it doesn’t require to be one today. (Just in case my new-found fans in South Africa are wondering quite who Flabby Spice is, she’s the porky little blond piece that was one of the Spice Girls in her youth.)

Still talking of things vaguely musical, apparently Dungeness features on album covers by artists as diverse as The Thrills and Aled Jones. Although being colder, greyer, windier and even bleaker than the flatlands of Lincolnshire, I couldn’t work out why – seems better suited to the depressing whining of Morrissey and the Smiths. In fact, to me the entire place looked more like a set from a 1970s Dr Who episode than an album cover.

My paranoia with nuclear power had me convinced I was being irradiated by fallout from those two nuclear power stations, and at the very least I expected to see people with cabbages for heads. At the very worst I thought I’d be attacked by a sea devil; one of those being known as a Silurian to a genuine Whovian; Whovian, I’m told, being the preferred name for Dr Who anoraks.

My Supacat machine drive was to be fitted in with official trials, time permitting. But, as with all things official, much faffing ensued between very short periods of action. So, making the most of my ample free time, I picked the brains of the Royal National Lifeboat Institution’s (RNLI’s) Steve Austen (who wasn’t bionic) and Supacat’s Simon Turner. The RNLI is the British equivalent of South Africa’s National Sea Rescue Institute (NSRI), incidentally.

My plan was to get all the information I needed from them before their brains became totally irradiated. Remember, they’d been there a lot longer than I had – and while their RNLI-issue protective headwear would definitely reduce damage from falling objects (on a beach, that would be seagull poo, then?), they really should have been wearing a woolly hat like mine. It was lead-lined and I bought it specifically for the trip from www.protectyour brainfromnuclearradiation.com.

Dungeness’ lifeboat station was selected for these trials because, with a 20° incline on shingle, it’s the worst beach of its type for launch and recovery here in the UK. The day was selected because the pretty window-dressing girls that replaced proper weathermen as the Met Office’s representatives on TV had predicted bad weather. Clearly, the Weather Girls should have stuck to releasing dodgy disco singles, as in lifeboat-speak the sea was no more than “choppy”. Have to say it looked rough to me; rough enough to require a lifeboat to rescue yet another of those inept, blindfolded, one-armed men who attempt to sail around the world – backwards – in a beer barrel, but rowing only on Tuesdays… 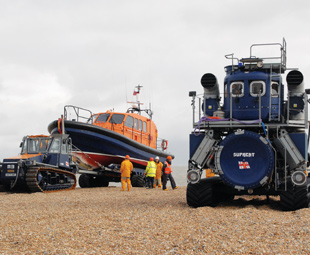 And talking lifeboats, it turned out that a flash-looking lifeboat was the driving force behind the launch and recovery equipment. The FCB2 (Fast Carriage Boat 2) is being trialled as a replacement for the RNLI’s Mersey class, which was introduced in 1988 and is nearing the end of its operational life. The current RNLI fleet consists of 332 boats of ten different types (including hovercraft) at 233 stations around the country. There are 37 Merseys in service at 24 stations that launch and recover them directly from the beach – and this includes Wells, which at low tide requires a 3 km drive across sand, mud flats and deep river channels to reach open sea.

Bigger and more capable than its predecessor, the 25-knot, 15-ton FCB2 requires new launch and recovery equipment, and from a competitive tender in 2002 two companies were selected to produce prototypes. While very different in appearance, both prototypes – on paper – meet the technical specifications. One system, produced by Clayton Engineering Ltd, is a modification of the current Mersey launch tractor coupled to a new carriage. The other system, produced by Supacat, features a completely new tractor and carriage design. Launching with either system involves sliding off the angled carriages in calm water, or driving off in rougher weather. Recovery onto the carriages is bow-first. The more complex Supacat trailer is driven and able to slew, negating the need to de-couple and re-couple the tractor.

Now, there’s absolutely no doubt that lifeboat men (I’ll bet, for lesbian-appeasing reasons, I’m supposed to call them lifeboat persons…) are some of the bravest people around; but why, as I climbed up and into the diving-bell-like cab of the Supacat machine, did the FCB2 suddenly become as desolate as the Marie Celeste? Were they scared? Did my driving reputation precede me, I wonder?

The Supacat machine is hydrostatically driven and so it’s simply a case of sit back and push an armrest-mounted joystick in the direction you wish to travel. Maximum speed in high range is a sedate – but opposition arse-kicking – 16.5 km/h. Motive power is provided by a Tier 2 310 kW (422 hp)-developing version of the Mercedes-Benz OM 501 LA, as found in an Actros near you. The all-up weight of the machine and lifeboat is 47 t and, for that all important traction, the four rubber-band-type tracks, drive. In the unlikely event that you get stuck or break down and the tide opts to come in before recovery/repair can be affected, the machine is designed to close down and survive immersion by a 9 m tide.

No chances were taken though, and I wasn’t allowed anywhere near the water. With an estimated value of over £2 million for the boat and launcher system, I wasn’t going to argue with that.

Before heading home, and totally out of character for a person who firmly believes charity begins at home, I put ten quid in Dungeness’ lifeboat station’s donation box. The RNLI is 100% funded by donations, so I suggested to everybody else I knew that they should do something similar. (Okay, I admit… it’s also because I didn’t want them to encourage Flabby Spice by buying her single…)

After this article was written, Supacat announced it had been awarded a £1-million-plus contract by the RNLI to design and produce a pre-production standard machine. The contract covers the modification and rebuilding of the original prototype machine to include design improvements identified over three years of trials. 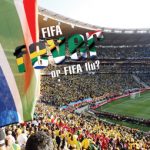