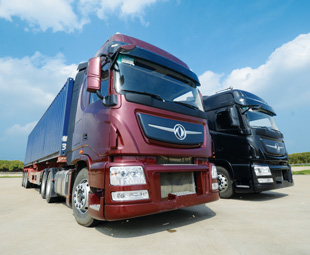 With its new heavy-duty truck, Dongfeng wants to take on the European market. Can the Chinese company achieve this? CHARLEEN CLARKE travels to Xiangyang to find out.

Sometimes names don’t mean much. Dongfeng’s new heavy-duty truck, the Kinland Flagship, is a case in point. Its Chinese name actually means “dragon from the sky” … Why on earth the company didn’t call it the “Dragon” I really don’t know.

However, one thing that I can reveal is that, with this new truck (which will make its global debut at the 2014 IAA), the enormous Chinese company wants to breath fire over the European truck market. But can it take on the Europeans at what they do best?

In order to answer this question, I travelled to the Hubei province of China – and the city of Xiangyang specifically. Like most other Chinese cities, it is punctuated by enormous apartment blocks in various stages of construction, soaring upwards into the clouds.

Xiangyang is pretty special in trucking terms, however, because that’s where Dongfeng’s enormous testing facility is located. One Dongfeng official tells me it’s the largest in Asia. Maybe. It’s certainly one of the busiest; during my visit a variety of makes and models whiz around the banked circuit (it’s not only used by Dongfeng to test its products, but also by the industry at large).

We’re not bothered by mere mortals, however. In typical grandiose Chinese style, Dongfeng has closed off an entire section of the proving ground; it’s reserved exclusively for our use.

The start of our visit is fairly dramatic, as we park on the side of the track … and, seconds later, two Kinland Flagships approach at high speed. The one is deep maroon; the other is black. They paint a melodramatic picture as they race up to us and park.

Then it’s time for us to experience the duo of Dongfeng darlings – but first we are taken around the circuit by technical experts. They point out the nuances of the track, insisting that we don’t do more than 75 km/h on particularly tight sections. Personally, I think they’re nuts. I wouldn’t go faster than 60 km/h through such a tight turn – especially given the fact that the rigs are fully loaded to 55 t. But I remain mum … and wait my turn to drive.

I decide to start off in the easier of the two; the so-called high-spec model, which is equipped with a 13-litre Dongfeng Cummins engine and a Volvo gearbox – the VT2214B. 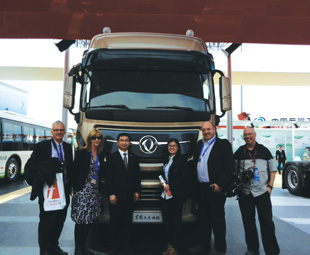 Before I fire up the engine, the technical expert takes me through the cab and its various features. It’s all pretty standard, but I can see that he’s proud of some aspects such as the steering-wheel-mounted controls (for the sound system and cruise control) and the sunroof that closes automatically when you turn off the engine (just in case you forget to close it and it rains).

Unfortunately I cannot comment on the interior too much – we’re driving prototypes and the interior is not necessarily reflective of the final design. However, what I see is practical and utilitarian. I love the S-shape … it’s very yin/yang. It’s not as plush as the European trucks – but it’s certainly functional.

Then we’re off. Given the 55 t, I’m not really anticipating a very smooth ride – thinking that the truck may be a bit skittish. Not so. It pulls off smoothly and effortlessly – there are no vibrations or shaking mirrors or anything like that – and soon we’re racing to the section that is limited to 75 km/h.

The truck navigates the tight turn effortlessly; the steering is direct, without being excessively so. I really enjoy the leaf-spring suspension of the vehicle; it has a wonderfully comfortable ride. As my German International Truck of the Year jury member colleague comments, there’s no excessive body roll or sharp nose-diving under braking …

Then we’re on the straight and the technical expert encourages me to go faster. I flip the switch, which converts the mode from economy to power, and, within a minute or so, we’re racing down the straight towards another
75 km/h control area.

I sense that my Chinese supervisor is getting twitchy, so I tap off and use the retarder to slow the beast to about 65 km/h (I’m still not comfortable with the concept of blasting through a particularly tight section). 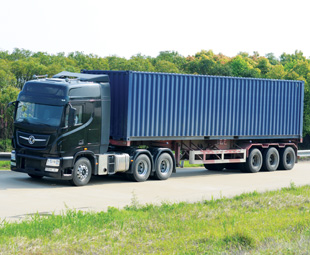 All too soon, my first test drive is over. I slow before the end of the circuit and gently apply the brakes – which, it must be said, are quite harsh. Never mind. They’re effective enough and we stop in very good time.

Feeling rather plucky, I decide to tackle the low-spec model next, which comes with the same engine and load – but a manual ZF12AS2540 TO gearbox (12+2). I worry about making an idiot out of myself while changing gears, but it’s absolutely effortless … and I even find myself nearing that 75 km/h through the tight and twisty bits.

The steering doesn’t feel as direct and the suspension isn’t quite as forgiving. On a positive note, the brakes are considerably less harsh (or maybe I am just becoming better friends with the dragon).

At the end of both test drives, I am greeted with an explosion of flashes – as the Chinese take scores of photographs of yours truly emerging from the cab. The reason for their enthusiasm is obvious: this is the first time in the world that a journalist has tamed their dragon.

Then it’s time to chill and chat to senior officials from Dongfeng, who seek my opinion. Will it sell in South Africa, they ask. Sure, I say – once a right-hand drive derivative is available. How should it be priced versus a Mercedes-Benz, they ask. Considerably lower, is my rather evasive response.

Finally, is it good enough to compete in Europe? Not yet, is my totally honest response. The Kinland Flagship is a true workhorse; it’s not quite as refined and luxurious as its European competitors.

But, ask me the very same question in five years or so … and my answer may be completely different. Watch this space; the Chinese are coming. 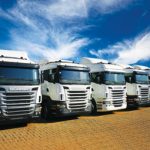 Prev Used vehicles done properly
Next More, from the future 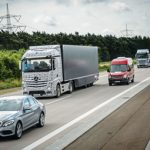