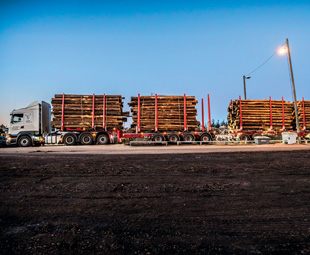 What does it take for the biggest truck in Europe to survive the challenging conditions of the Nordic? JOUNI HIEVANEN, of Finnish magazine Ajolinja, finds out.

Ketonen Transportation’s 104-t tractor trailer started to operate between Ivalo and Rovaniemi, Finland, at the beginning of October 2015.

This high-capacity transport (HCT) project had an application being processed by the office of road safety (Trafi) for a long time. It took time to get the verdict from the officials who control the road (ELY-keskus of Lapland) and also make the necessary adjustments to the road. Finally, Ketonen Transportation had to wait for the semi-trailer to be completed.

Bridges, that were in poor shape on the route, had to be modified, due to the weight of the rig. Traffic lights were mounted on a weak bridge over the Jeesiö River in Sodankylä, which the driver controls by remote to ensure that there are no other vehicles on the bridge at the same time. Other bridges that are also in poor shape (like Norvatie Bridge in Rovaniemi) are being strengthened.

The truck needs to be driven as close to the middle of the road as possible. Decisions about road renovations are to be made after the five-year test period. Investments in infrastructure will not be made for only one test lorry …

There is a four-axle semi-trailer, the last axel of which is a steering one. The hindmost trailer is standard and overall capacity is 77 t.

When driving on a flat surface at 82 km/h, the 544 kW (730 hp) V8 engine runs at 1 200 r/min, so the gearing is pretty normal … “If we drive at 89 km/h, the speed difference to a car being driven at 100 km/h would be so small that passing the truck would take a long time,” says transport entrepreneur Teemu Ketonen. 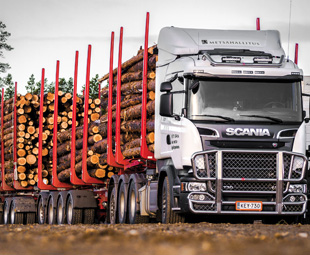 The fuel consumption of the fully loaded truck, equipped with summer tyres and summer diesel, is 76 to 77 l/100 km. Average consumption, for a vehicle which is empty for half of the trip, is 61 l/100 km.

“We haven’t noticed anything extraordinary,” says Scania Finland’s product manager, Mika Jukkara. “For example, the temperature of the engine has remained normal, even though it has to work really hard – especially on Magneettimäki hill.”

The Magneettimäki hill in Saariselkä, which is two kilometres long, is challenging for the timber truck. According to a road simulation that is done in advance, the fully loaded 104-t, 730-hp truck’s speed would drop to 23 km/h when travelling up this big hill. In practice, though, much higher speeds have been recorded … the slowest being under 26 km/h and the top speed being 38 km/h.

There is, therefore, a range in speed and driving circumstances. “Head wind, slippery conditions, snow, rain and different cargos have an impact on ascent,” says Ketonen.

The driver has to switch to the sixth gear (low gear) if the speed drops under 30 km/h. Ascent is usually made driving on seventh gear.

The beginning of the route is in a hilly area. The Scania’s Opticruise automated-manual transmission is used there; allowing the driver to know accurately what the right revs and gears are to use on different hills.

The R730 Scania features Predictive Powertrain Control, which knows the shape of the terrain. It is used when driving without cargo, but also with cargo on the flat sections after the hilly area. At this point Opticruise is also in automatic mode.

Eco mode in the smart cruise control lets the speed drop by 10 km/h before the hill. Experience with the 104-t rig suggests that the speed should often drop even more, but, when the driver predicts the road ahead and the lane is free, braking is needed only in some places. All of the 13 axles have disc brakes. 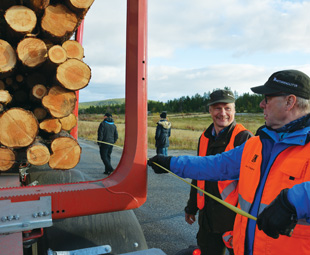 “The retarder is all you need; it is very powerful,” Ketonen says.

The biggest truck in Europe operates almost entirely in the north side of the Arctic Circle, where there is a hard ridge of snow on the road during wintertime. There was no snow during our drive, so we drove with summer tyres and occasionally it was pretty slippery.

Sand spreaders have been used a couple of times as they give good grip. “Correct weight distribution and a sand spreader was all we needed and there haven’t been any further problems,” Teemu Ketonen says.

Rear-axle (equipped with air springs) weight distribution comes on factory settings. Weight distribution from front to rear axles ends when the rear has a weight of 16,9 t. The steering axle has an especially important role, because it can be lightened to zero cargo. Nevertheless, the axle doesn’t come up off the road when driving on full cargo.

The winter equipment also includes Onspot chain throwers. “Onspot has been tested by throwing the chains under drive shaft. Chain throwers work best when there is snow and ice,” says Ketonen.

“The worst driving surface is black ice, as you cannot predict if the temperature will occasionally rise over zero and then freeze again,” Ketonen says.

A hard ridge of snow on the road is easier. Road maintenance vehicles and other cars with studs make the surface of the ridge rougher, but Ketonen doesn’t see any problems, because the vehicle has so much winter equipment. Furthermore, there is a restriction that a 104-t vehicle may not be driven when the road is extra slippery, as defined by Finnish Meteorological Institute’s standards.

The distance covered for the truck’s timber collection trip is 600 km, which is driven twice a day. It takes up to four hours to drive from Rovaniemi to Ivalo and the mandatory 45-minute break is taken while loading.

“The logistics isn’t at the most effective level right now,” Ketonen says. The company wants to have a permit for another long truck and one extra trailer pair. Then the vehicle would need to change trailers only at each end of the trip, and it could leave as fully loaded immediately, tackling the ice once more. 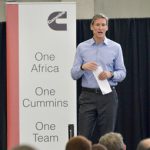 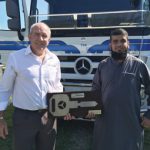