One of the issues that repeatedly grabs my attention is that of driver assistance devices. Now it’s time to consider where all this may be leading…

We are currently into the third generation of driver assistance devices. The first lasted from around 1970 to 1990. During this time, mass-market vehicles acquired the basic elements needed to create a vehicle with safe roadholding. These included a rigid chassis, predictable suspension response, and a move towards front-wheel drive that does not suffer from the power-on over-steer that killed so many people in the era dominated by rear-wheel drive.

The second generation was when electronics started to be used to compensate for  vehicle control skills few drivers had or have. This started on a large scale in about 1990, when ABS became commonplace in vehicles, eliminating the often-fatal consequences of an instinctive panic reaction to freeze on the brakes. Then, along came stability control and suddenly a computer could outperform all but the most skilled humans at skid control. Mark my words: as stability control fitment approaches 100%, skid pan training will become obsolete and 15 years from now will probably have disappeared altogether.

Electronic driver assistance has thus replaced the need for emergency physical reaction skills and we’ve entered the third generation: electronic mental skills assistance. This is where vehicle designers have turned to computers to not only help drivers extract themselves from extreme situations, but to prevent them from happening in the first place. For instance, the average driver almost never keeps a correct following distance. Since inadequate following distance is the biggest cause of crashes, the solution is easy: design a radar-based cruise control system which automatically maintains a safe gap. Some drivers have poor lane discipline. Solution: equip vehicles with a system that warns them when they wander out of their lanes. And what about drivers who drive too fast for their headlights at night? Simple: use infra-red thermal imaging so that they are able to see and avoid pedestrians. This makes it possible, for the first time, to travel at whatever speed they like at night on dipped beams without risking a pedestrian crash. Many other  similar “mental skills” technologies are appearing, mostly on high-end models; but they will eventually trickle down the feeding chain until they’re widespread, just as ABS and stability control did.

There has long been a dream of a driver-less vehicle capable of negotiating public roads, but I doubt it’ll be something that’s invented overnight – rather, I think it’ll be an incremental process as layer after layer of new technology replaces the mental skills which drivers either weren’t taught at license level or just refuse to apply. It almost boggles the mind to think of a road network of automated vehicles that can complete every single journey without committing a traffic offence. Within 40 to 60 years, I reckon the traffic police, driving schools, the driving test, and defensive driver training will be redundant – and road accidents will, in the words of Richard Gordon, be reported as sensationally as nuclear ones. 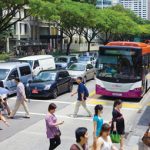