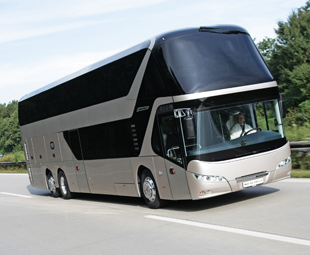 Visitors to MAN’s exhibits at the recent IAA would have been captivated by the manufacturer’s very striking “Concept S” truck-tractor design study.

However, slightly less futuristic (it is scheduled for field trials next year and to enter production early in 2012), but almost equally stunning, was the Group’s new Neoplan Skyliner double-decker coach, which was being previewed at the show. Neoplan has been in the business of building double-decker coaches under the Skyliner name since 1964. In 2001, Neoplan was absorbed into the MAN family, and since then has operated within the Neoman division of the Group.

The new Skyliner will constitute the next generation of a product range that has sold more than 4 000 units since its introduction. It measures slightly less than 14 metres in overall length, is four metres high, and offers a seating capacity of 83 plus a crew of two. The side windows wrap around into the roof to provide improved visibility and increased headroom above the outer seats. Upper deck headroom measures 1,68 metres, while movement on the lower deck will be greatly facilitated by 1,81 metres of clear vertical space. A total of 56 kW of air-conditioning power is provided by a rear-mounted unit feeding the upper deck, and two additional evaporators, mounted on each side above the front wheels, improve air flow to the lower saloon. This arrangement allows for the setting of different temperatures on the upper rest deck, and the lower communication and catering area.

Structurally, the new Skyliner features a stable passenger cell built from high-strength steel tubing protected from corrosion by a cathodic dip painting process. Dynamic safety is provided by ABS, electronic braking control with braking assistant, maximum speed control, automatic cruise control and a lane guard system. The front wheels are suspended independently, and the rear is supported by a MAN hypoid axle and electronically steered tag axle. Electronically controlled dampers are provided to enhance comfort and safety, and the coach will be powered by a 371 kW (505 hp) MAN D26 common-rail diesel, driving through an automated TipMatic Coach transmission.

While the new Skyliner will undoubtedly enhance Neoman’s reputation in Europe, another announcement by the manufacturer, reported in August, will have even greater significance in markets such as South Africa. This relates to a new range of global bus chassis, based on the highly successful Lion’s Explorer built at MAN’s plant at Olifantsfontein, north of Johannesburg, the manufacturer’s current European coach chassis, and the chassis range built by the erstwhile Volkswagen operation in Brazil. This range will be suitable for bodying by local coachbuilders in the target market territories, and is also to be manufactured by Force Motors, MAN’s Indian partner, for its domestic market. 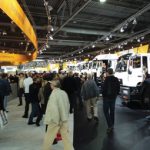