If you’ve worked in the transport and logistics industry for some time, you will have noticed more and more women showing their male counterparts how things should be done. GAVIN MYERS gets smitten by some of our industry’s lovely women.

Margaret Phillipson, FOCUS customer service manager, concurs: “People move on, but they generally stay within the transport industry. But it’s important for us to embrace change.” Of course, I thought, who better to consult on this than the two women who tackle all our groundwork and really do know everyone there is to know in this industry (it’s actually quite intimidating at times). Bowden herself has been doing sales in the industry for five years, Phillipson six.

Bowden continues, “In the past year or two, more and more women are attending industry meetings and making huge inroads within the industry as a whole. From sales reps to technicians – never mind the number of female drivers that are being recognised, it’s great! Boys, you had better watch out; the girls are coming!” she chuckles.

Phillipson agrees that, yes, while the industry is still very male dominated – and that it was mostly men who made it what it is today – the women already in the industry are doing equally well. “There are still tons of opportunities for many more females in the transport industry, and why not? We do a great job!”

These two women have more diesel pumping through their systems than they let on… “I have had the most amazing opportunities to experience things I never thought possible,” notes Phillipson. “I’ve driven a truck at Gerotec, and fired an AK-47 when we covered Operation Rachelle with Isuzu, SAPS and the Mozambican police services.”

“They say that to be truly part of the transport industry diesel runs in your veins…” smiles Bowden. “How funny is this, but I discovered that my grandfather was a London bus driver!” Certainly a part of the more vibrant side of our industry, both Phillipson and Bowden love what they do and have never looked back.

FOCUS met a few other leading women who can say the same:

With 3 700 employees across Trentyre’s factories, retail, fleet management and massive on-site operations, she knows this all too well. Bronkhorst’s contribution to the group has grown hugely in recent years. “You have to be around all the time, be involved in every aspect of the business to ensure buy-in from every one,” she maintains. “Treating people with dignity and respect is essential.”

Bronkhorst, who holds an MBA, considers her division’s biggest responsibilities to be the ongoing training and development of Trentyre people, as well as keeping pace with the countless, ever-shifting legal compliance issues affecting the industry, from health and safety to employment equity and B-BBEE.

So how does she do it? “Reading and networking keep me ahead. I recently attended Chamber of Commerce presentations on business in Africa, for example, which was valuable in terms of relationship building. We can all benefit from the best practices of other companies.” She is also a director of the South African Tyre Recycling Process company (SATRP), a member of the Retail Motor Industry Organisation of South Africa (RMI), sits on the wage negotiations committee for the motor industry bargaining council and ensures she builds strong partnerships with various unions.

No doubt then that Bronkhorst is one extremely busy executive. Her secret is balance and a warm, close family. “It’s not always easy but I do believe in down time. My husband and I love to travel, seeing different parts of the world every year. Between us we have five children and seven grandchildren, most of them living in Gauteng.

“As women in a male-dominated industry, some make the mistake of being a ‘poppie’ while others think they need to be one of the guys. My husband recently pointed out a bumper sticker that read: ‘A woman who wants to be equal to men has no ambition’,” she chuckles. “I enjoyed that! In life, as in business, I am my own person and stay true to my values. That matters more than trying to fit in to what you are not.”

Angela Dick, Transman CEO
Raised in Durban and educated in Pietermaritzburg, Angela Dick, CEO of Transman, originally studied to be a teacher. Eventually she became a lecturer, and was also appointed as an external examiner for the then University of Natal. So how on earth did she land up as the CEO of a company that places over 9 000 people a day in positions of temporary employment?

That all started in 1983, when Dick formed Transman with a former partner. The focus at the time was to provide a driver training and placement service for the transport industry. She points out that there was a very strong need for this at the time, just as there is currently. They were also commissioned by the CSIR to write the very first driver training manual for heavy vehicle drivers. There was another aspect though: “I was extremely concerned at the hopelessness and pure desperation I saw in the eyes of work-seekers, hoping for any type of employment, standing around at factory gates in the early hours of every morning. They were totally defenceless.”

Under her leadership, Transman has been built to be an all-encompassing placement agency, not just covering the automotive and transport industries, although this remains a key area of interest. Approximately 25% of their placements are made in the transport and logistics industries. She received the South African Businesswoman of the Year award in 2006, the inaugural winner in the entrepreneurial category. But her biggest reward is finding a job for someone in desperate need, and therefore enabling them to support their families. “It is an enormous responsibility and one that I take very seriously,” she says.

“I want to leave a positive legacy behind; every interaction with Transman must leave the person concerned with a positive benefit.” Of course, dealing with people is one of the most demanding aspects.

Dick notes that, although she deals mainly with men in terms of serious decision making, it does appear that most transport companies are trying to encourage more females into their structures, also acknowledging South Africa’s very successful female-led transport companies.

With a smile, she describes herself as “a real mix of what you would not expect”, and points out the importance of having a sense of balance in everything she does

Lisa Lansdell, AFS Group account manager and marketing assistant
With no original intention to enter the industry, Lisa Lansdell, account manager and marketing assistant for the Automated Fuel Systems Group, found herself immersed in the business of AFS quite by accident. After hearing about vacancies at the Johannesburg office of AFS through a friend, Lansdell got a job as a sales representative for the Gauteng region of the company. In eight years she has worked her way up to her current position.

AFS specialises in fuel management and supplies technology and services to control and measure the entire fuel supply chain, with products and services that combine to automate and manage all aspects of procurement, delivery, storage, sales and consumption. “There is nothing in the industry that we cannot automate – everything is possible,” she enthuses.

Clearly someone who enjoys learning and values human relationships, Lansdell, who has a tourism diploma and BCom Marketing degree from Unisa, says the exposure to the industry and her customers and business partners is what she loves most about her job. “It’s so diverse; the learning is endless,” she adds.

Nevertheless, she says meeting her customers’ expectations and maintaining excellent service levels at all times is her biggest challenge. “I’m big on customer service and building relationships – it is key that the customer remains happy and remains a customer,” she notes. “Our business is built on relationships and those that I have built will stay with me for all time.”

And, in these times, strong relationships are very important. “Right now things are really tough for our customers and consumers alike. Keeping up with the fuel price is a challenge – the running cost of fleets is always an area of concern,” says Lansdell. “The current strikes can cripple our customers and making profit in such a volatile environment is not easy. Tough market, tough business!”

Lansdell, who recently became a mom (and enjoys bass fishing on the odd occasion), notes that the environment in which she operates is still male dominated to a degree, but there are some “feisty females” in the market who are making a difference. She laughs: “Females are naturally energetic, and therefore more productive!” 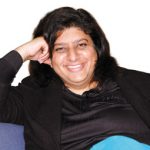 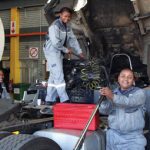