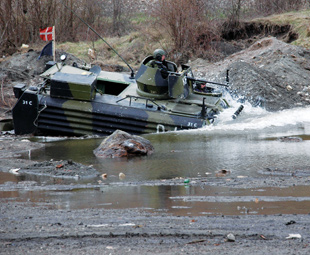 SHAUN CONNORS enjoys a bit of ethnic cleansing with the French army before getting into even deeper water with the Danish.

Very much like politics in general, the politics of Kosovo are as boring as hell and far better-suited to some tedious cable TV channel than the pages of Focus. So, with the exception of the following very brief introduction-come-overview, as far as I’m concerned that’s where they’ll stay.

Since the 1999 United Nations Non-Aligned Treaty Organisation (NATO) intervention into the Kosovo conflict, this province of what was once known as Yugoslavia has been under the custodianship of the United Nations Mission in Kosovo (UNMIK). Kosovo FORce (KFOR), a NATO led international armed force, provides assistance to UNMIK by “keeping the locals in order” as the English would say. With this in mind, it has split Kosovo into four areas of responsibility (AORs) with the Multi-National Task Force North (MNTFN) AOR headed by a 2 000-strong French contingent. For reasons unknown and never explained, the French thought I might like to join them in Kosovo at Camp Belvedere.

Had I known then that joining them would be a logistical nightmare, the highlight of which would be ten hours in a C130 Hercules military transport aircraft, I might not have been quite so keen to say, “Oui”!

During my stay in Kosovo I was teamed and shared accommodation with another journalist: a local newspaper hack from France whom, it turned out, when not visiting monasteries had a penchant for the views of local pseudo-politicians. He had no interest whatsoever in vehicles. So, with me not caring a jot about anything that doesn’t have a diesel engine, we quickly became known by the French press information officers (PIOs) as “les couples impairs” (the odd couple). Which of us they had pegged to be the Walter Matthau character I’m not sure.

Sweet talker
It took me a couple of hard days’ sweet talking to get the French to say, “Oui” to the idea of Connors taking something armoured for a drive, but eventually they came round to my way of thinking. Well, almost… 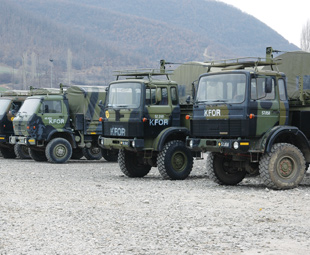 I’d been given the AMX 10P tracked armoured personnel carrier (APC) I wanted; but it appeared that I would be restricted to the parade square, with two soldiers hanging on to the hull of the thing for dear life. The soldier on my left spoke no English and I speak no French, so his instructions came to me via the soldier on my right, who spoke some English. This arrangement – especially when a, “Sorry, could you repeat that?” was involved – made the Neil Armstrong-Mission Control delay look positively instantaneous. The net result was an early termination of my drive.

After Camp Belvedere my itinerary had me visiting the 300-strong Danish KFOR contingent at Camp Olaf Rye. For communications reasons previously detailed, news of the opening for a gardener at the French camp had yet to reach the Danish, so in their typically relaxed style the Danes were very enthusiastic about the idea of me taking one of their M113 APCs for a drive.

“There’s a place, an old lead factory, a few kms out of town where we can go for something like this. I will volunteer some volunteers to accompany us,” advised my host, Sergeant First Class René Schjødt. Within minutes we’d been joined by seven armed-to-the-teeth guys looking as if, for starters, they could take on and beat Predator, then polish off Alien and Godzilla for dessert; without breaking a sweat.

“Is all that firepower really necessary to subdue a few potentially unruly locals?” I asked nervously. “Maybe,” René replied. Perhaps years of exposure to all that lead had affected something out there in them thar hills.

During the 10 km road trip to LeadoLand (LegoLand; geddit? No? Lego is Danish!), René brought me up to speed with the M113 APC. Production began in 1960 with the aluminium-armoured M113; and by 2009 around 52,000 of the world’s most popular tracked APCs had been delivered to over 50 countries. Denmark has a fleet of 650 and the vehicle I was in, Dolph (named after a blue fascist Hippo from a Danish TV show), was delivered in 1962. However, it didn’t look, or ride, like something almost as old as me and twice as old as most of its crew.

“That’s because, in addition to regular overhauls, it has been upgraded,” explained René. The original petrol engine was replaced fleet-wide by a Detroit diesel during the 80s, and in 2000 the current upgrade programme for about 300 vehicles began. Dolph, now designated a M113 G3DK, is powered by a six-cylinder 10.6 l turbo-charged and inter cooled MTU diesel that develops a healthy 300 hp. Maximum speed is limited to 60 km/hr (37 mph) although, with its limiter removed, rumour has it that 100 km/h (62 mph) is possible. It takes 18 seconds to reach 50 km/h from standstill.

The armour plating has also been upgraded. In addition to an inner layer of Kevlar, that asbestos-roofing-like stuff bolted to the side of the vehicle is actually the latest in rocket propelled grenade (RPG) protection.

On arrival at LeadoLand, René announced that I’d be driving. His fearless Danish Vikings promptly bailed from the APC almost as fast as rats would have from a sinking ancestral longship. One took my camera to photograph “just in case” and, as we pulled away, Private Lurpak (or something equally Danish-sounding) advised René: “Det er ok, vandet er ikke særlig dybt. Jeg har været her før.”

Back in Denmark, René is a bit of a Danish Army Swiss Army Knife if that makes sense.  He’s a platoon sergeant, a driving instructor for cars, trucks and APCs; and he’s also an instructor for anti-tank rockets and the 12.7 mm heavy machine gun with which the APC is armed. However, with a range of nearly a mile and the ability to turn even a light armoured vehicle into a piece of Swiss cheese in seconds, my request for a “bit of target practice” with it was swiftly denied. 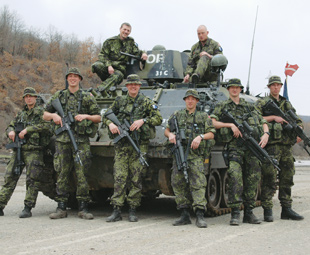 As for driving? Piece of cake. You have a steering wheel and two pedals, a throttle and brake. The 6F/2R automatic gearbox has four manually selected gear ranges. Gear 1 is 1st gear only; gear 2 is 2nd to 4th; gear 3 is 2nd to 5th and gear 4 is 3rd to 6th. There’s also the neutral turn position. Select it, turn the wheel left or right and one track drives forward, the other backwards; so on the spot you do the best donuts in the world. Ever…

It took me about 15 minutes of milk runs and scattering soldiers to come to terms with the fact that the turning circle is very much dependent on the gear you’re in, ranging from just 4.84 m in 1st to 37.74 m in 6th. That aside, everything should have been fine. The trouble is, like a child I’m drawn to puddles; the bigger the better. And this was one big puddle. But remember, Private Lurpak had told us: “Det er ok, vandet er ikke særlig dybt. Jeg har været her før”; which by this time I knew to be, “It’s OK, the water is not very deep. I have been here before.” New Connors’ policy: never trust anybody whose ancestors raped and pillaged yours.

When first built the M113 was amphibious, but with the added weight of extra protection Danish M113s are now more divers than free stylers. Even so, they can still ford around 1.85 m of water, the height of the engine air intake. Just as well, really. I was about to dive into a crater that was at least that deep, at 15 km/h and with all hatches open. I never even noticed the crater; but, hey, I was the learner. And judging by his reaction (which I believe included an involuntary bowel movement), I don’t think René did either.

By the time we had limped back to dry land, carried out some impromptu repairs on the track guards and drained sufficient water out of the APC to irrigate a Somalian smallholding for a dry season, the air temperature had dropped 10°, it was raining, and everybody was nearly as wet as me and wanted to go home.

But the story doesn’t end there. In Kosovo the locals will jet-wash anything, including an APC, for about R45. Plan A had been to make use of this service on the way back to camp, saving the guys a job the next day. Bad weather put the tin hat on that, however: too wet and too cold. Like all good sergeants, though, René had a Plan B. Private Lurpak was suspiciously absent from breakfast the next morning. “Where is he?” I asked. “Plan B: still cleaning Dolph, inside and out, with his toothbrush,” I was told. 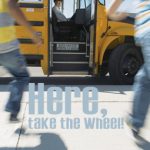