From Kashmir to Kerala 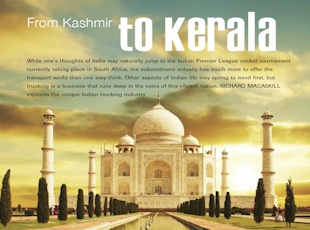 While one’s thoughts of India may naturally jump to the Indian Premier League cricket tournament currently taking place in South Africa, the subcontinent actually has much more to offer the transport world than one may think. Other aspects of Indian life may spring to mind first, but trucking is a business that runs deep in the veins of this vibrant nation. RICHARD MACASKILL explores the unique Indian trucking industry.

When one thinks of India, one’s thoughts do not immediately jump to burgeoning trade and industry; however, India is one of the fastest-growing economies in the world. Trucks go hand in hand with booming economies, and India is no different.

India is well known around the world for its tea, and this is indeed one of the country’s main exports, along with textiles and, incidentally, trucks. Statistics cite a rate of 72% of all trucks made in India being exported. With manufacturers such as Tata, Mahindra and Ashok Leyland, among other giants and joint ventures, this is not small change either.

Between 1998 and 2004, India’s commercial vehicle output rate multiplied by 2.8, whereas this figure only reached 2.2 for passenger vehicles. It becomes easy to see why trucks and buses line the roads of India, and the country is suddenly seen in a different light – one in which transport becomes the centre of this emerging economy.

It is important to remember that approximately 60% of India’s population of 1.2 billion people is dependent on agriculture. While dependence on agriculture is one of the indicators of a third world economy, it can also indicate an emerging one, as is the case in India. India’s GDP has grown by over 9% for the past three years and the country has enjoyed growth of over 7% over the last decade.

One of the many aspects that emerging economies have in common is trucks. Transport is crucial in emerging economies to ensure that infrastructure continues to grow and that the whole country is effectively serviced. Whether it is for export of the trucks themselves, the export of textiles and tea or simply aiding the growth of infrastructure throughout the country, trucks make up a vital part of India’s development.

However, while India’s economy has been a steadily emerging one for more than a decade, this does not mean that the country has escaped from the economic crisis that the whole world is currently experiencing. In addition, the Indian trucking and transport industries have many challenges with which they have to contend, including massive congestion and poor-quality roads and access (40% of rural villages are cut off completely during monsoon season, owing to a lack of all-weather roads), as well as railway and port inefficiencies. This means that road transport in India is under severe pressure that is the direct result of insufficient infrastructure.

One of India’s biggest problems is the price of oil. Owing to the sheer size and utilisation of the transport industry, oil does not only affect transport itself, but also all that transport is used for, and this can severely strain the country’s development. In India, over 70% of all goods and products and over 90% of all passengers are transported by road, and this augments the impact of the effects of an industry dealing with such problems.

Geology is a huge challenge to the Indian commercial vehicle and transport industries. Much like South Africa, India has myriad landscapes that both truck manufacturers and transporters alike need to take into account. In comparison, while Europe is one of the biggest truck markets in the world, it is fair to say that it is not the most challenging. Temperatures, while low, are fairly constant, as are road conditions.

India, on the other hand, has temperatures that can soar into the 40s and beyond or drop below zero, depending on the area, and the roads are even more varied than we encounter in South Africa. Gravel, dirt, tar, potholes and patchwork roads are commonplace in the average Indian truck driver’s day, and the industry needs to be able to deal with these variations in geology and road type.

However, there are a number of different plans and programmes currently in place in India that are aimed at aiding the industry in dealing with all the problems that it faces in India. Road construction programmes and financial programmes, as well as plans to improve both port and rail capacity, should have a major and positive effect on the Indiantrucking industry as a whole.

‘Might is right’. This is the rule that reigns on Indian roads. Not a bad rule if you’re a truck driver, though… While the Indian trucking industry is a massive one, it is not a terribly well-regulated one. Neither is transport in general. Roads are poorly maintained, truckers often drive homemade trucks called ‘illegals’ and rules seem not to apply.

While rules and regulations to promote safe trucking are in place in India, the enforcement of these rules is far from effective. According to John Aalborg, a trucking journalist in the USA, “Road rules are ignored and truck inspections change by situation.” He adds that while travellers, in both passenger vehicles and trucks, are supposed to drive on the left side of the road, this merely indicates which side of the road one starts their journey. After that, it becomes dangerously disorderly on the roads.

The similarities between South Africa and India are actually quite astounding, and this is particularly true of the trucking and transport industries. Many of the problems that transport suffers from in South Africa are shared by the subcontinent. In fact, South Africa almost seems better off.

As in South Africa, Indian truck drivers often carry an assistant with them, although in India, these assistants are referred to as ‘cleaners’. The situation in India can actually be so bad in areas that one of the duties of the cleaner is to spot trucks at night that do not have headlights and to spot where any other hazards one would not usually encounter elsewhere in the world may be.

Overloading is also rife in India, and the enforcement thereof is minimal at best. Furthermore, much like South Africa, where 87% of all goods and products are transported by road, over 70% are transported by road in India. This reliance on road versus rail transport is yet another indicator of the emerging structure of India, but given the development programmes being planned in India, it is one that provides hope for the future of transport in the nation.

For the South African trucker, India might almost feel like a second home, then – similar states of affairs, similar problems but, just as importantly, similar hopes for the future.

India is a remarkably interesting country in which to examine trucking and transport for a number of reasons. It shows that South Africa is not the only country with problems in trucking industry. It also signifies the turbulance that many developing countries experience (particularly important in relation to transport). India not only shows hope for the trucking industry in its own nation, but for ours in South Africa as well. 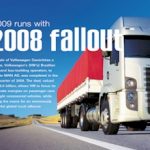