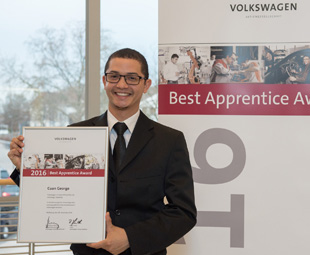 Twenty-five-year-old Cuan George has been honoured as the 2016 South African recipient of the Volkswagen “Best Trainee Award”, joining 45 of his peers from 19 countries to be honoured by the Volkswagen Group.

With its annual “Best Trainee Awards 2016”, held at the Group’s headquarters in Wolfsburg, Germany, nine young women and 36 young men were praised for their high levels of competence and proficiency in their respective fields during their training programs.

George joined Volkswagen Group South Africa as a Graduate Trainee in 2015. He currently works as a commodities buyer in the Purchasing department.

“I feel honoured to be one of the 45 trainees in the Volkswagen Group to be presented with the 2016 Best Trainee award. I am very grateful to Volkswagen South Africa for giving me the opportunity to be part of the Graduate Trainee Programme as well as all the people in the company that have influenced my career development thus far,” he says.

“Our Volkswagen Graduate Trainee programme has helped us to groom and nurture our young talent. The award bestowed to Cuan has confirmed that VWSA is doing the right things to develop its young crop of talented employees. We are very proud of Cuan’s achievement,” notes Thomas Schaefer, chairman and MD at VWSA.

“The automotive industry is more exciting for young people than ever before,” says Müller. “Similar to the entire industry, our company is faced with major changes such as autonomous driving, e-mobility, innovative mobility concepts, digitalisation and connectivity. This means that we must update our knowledge and skills at an increasingly rapid pace.” 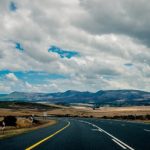 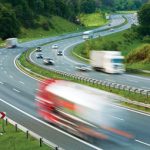