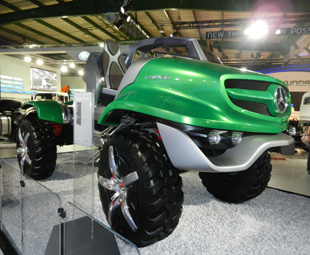 From unique trucks to innovative concepts that will save transport operators money, there is a lot to see and do on the Mercedes-Benz Commercial Vehicles stand at the Johannesburg International Motor Show (JIMS) this year.

And, if there is one person who is hugely excited about the stand, it’s Kobus van Zyl, the company’s vice president for commercial vehicles. We spoke to him in advance of the JIMS opening and it was clear that he could not wait for the show to open its doors.

One of the reasons why is the pride that he is displaying at the company’s stand. “We are the one company with so many different brands, competing in so many different segments. It’s a challenge to formulate a coherent stand. But I believe that we have more than achieved this. I look forward to seeing customers’ and competitor’s faces when they see what we have done this year,” he shared with FOCUS.

Van Zyl reveals that scores of international guests will visit JIMS this year. “I have so many of my overseas colleagues coming to the show. In fact, more and more of my colleagues are coming to JIMS, as the years pass. The reason why is simple: this is a world-class show. I am excited about the foreign interest and especially the African interest this year. We are really establishing ourselves as the driver into Africa,” he notes.

So exactly what can visitors expect from the Mercedes-Benz Commercial Vehicles stand? Terrific hospitality, for one. “Our customer hospitality area is dedicated to Western Star. It is a small but hugely passionate brand. It has an American theme and we are displaying a stunning Western Star; if you’re a trucker at heart and you don’t get excited about that, then I don’t know.”

Van Zyl says he is really enjoying hosting customers. “JIMS is only partially about showing products; 80 percent of the value of the show lies in networking,” he comments. As such, you’ll find him on the stand throughout the event.

And, while he’s here at the show, he is talking about lifecycle costs. “We are not launching any new products until we have low-sulphur fuel available nationally. As such, we are focusing more on value-added propositions. There are a couple of very innovative concepts on display. We are launching a number of initiatives that we have been testing over the past year – we are going public with these for the first time at JIMS. The concepts we are launching are not only benchmarks in South Africa; they are benchmarks in the world,” he claims.

Van Zyl says that these concepts are all about offering customers more uptime. “We invented that word. Now everyone uses it,” he says with a wry smile.

But he believes that talking uptime isn’t necessarily the way to go in the future. “We are changing our language now. We don’t want to talk about days or hours or minutes down. We want to talk about rands lost. If you tell a customer that he has lost R50 000 because a truck is standing, this changes the whole picture,” Van Zyl notes.

In addition to promoting concepts to bolster uptime, the Mercedes-Benz Commercial Vehicles stand is also home to an exceptionally special truck. “We are showing a vehicle that will draw more people than any passenger car on the show. It is spectacular. People will stand four or five deep to look at this vehicle,” he promised before the show opened its doors.

Well he’s right. The truck in question is a bright green Unimog concept truck. We first saw it at the IAA in Hannover last year. It rocked that show, and it is already drawing the crowds here at JIMS.

Ultimately, Van Zyl is massively proud of the company’s exhibit. “The South African team has come up with a remarkable concept. I look forward to hosting my overseas colleagues. Visitors will leave the show with confirmation of our standing – not only in South Africa but also in the world,” he concludes. 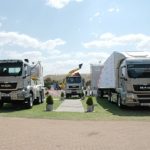 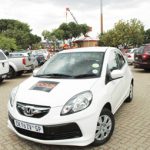