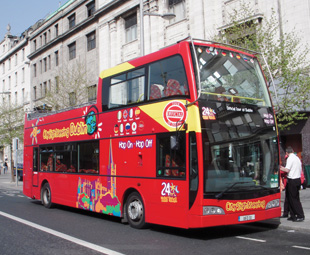 One of the most familiar sights in cities all over the world is the open-top bus. Full of camera-clicking tourists, laughing school children and various others groups, they travel global streets all year round, with several operators competing for business.

Making an enormous contribution to the tourism industry, the open-top bus is associated in most people’s minds with happy days out and victory parades for successful sports teams, or to honour some other special occasion. They weren’t always around, however, and how they arrived on the scene and then proliferated is worth recording. 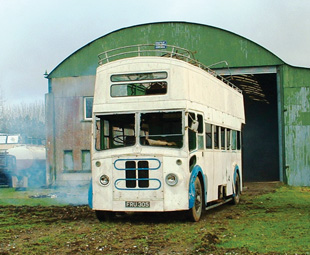 In the late 1920s, some (mainly obsolete) open-top, double-deck buses operated during the summer months in British seaside resorts. They proved to be very popular and were eventually replaced by somewhat newer vehicles. These, in turn, gave way to more modern buses – and so the line lived on. Among these was one with a very chequered history, which ended up at the Irish National Transport Museum.

The highly regarded Hants & Dorset Motor Services, which operated in the Bournemouth area, removed the 1937 Brush-built body from an old Leyland chassis in 1945. It was rebuilt as a 59-seater with an open top on an AEC-engined Bristol chassis, registered FRU 305 (Fleet No. 1108) and operated some 18 years before sale.

It came to Ireland in 1969 as an advertising bus for Jacobs Biscuits, and later, Calor Gas. It was bought by the Museum in 1975 to save it from the scrap yard and made a journey of fame in September 1977 when it carried the victorious Dublin GAA All-Ireland football team on their tour of honour from the Mansion House (official residence of the Lord Mayor of Dublin) to the general post office. It is believed to be the first open-top bus used for a victory parade in the Irish Republic. 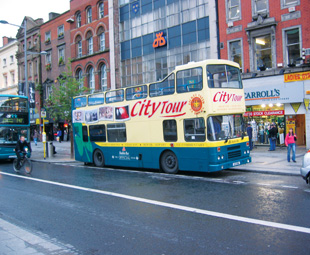 No. 1108 subsequently served at several other celebrations and was stored in Stack A, the famous Rennie building, also known as the Crimea Warehouse (now the CHQ Building) at the Custom House Docks in 1991.

Over a public holiday weekend, vandals broke in and damaged several vehicles, including No. 1108, which had all its windows broken and two pillars damaged when a lorry was driven into it.

Regarded by the Transport Museum as the progenitor of Irish open-top buses, No. 1108 is currently in secure storage awaiting repairs. The Museum also has a second open-top bus; an AEC Regent donated by Kavanagh’s of Urlingford.

There was little further interest in open-top buses until the establishment of Dublin Bus in 1987, after which such vehicles, modern Leyland Atlanteans, were converted and proved most successful.

Bus Eireann also converted a vehicle for Cork. Today, several companies are in competition for the lucrative open-top trade and many have invested in brand-new vehicles – a trend that would have been regarded as very risky only a few years ago. 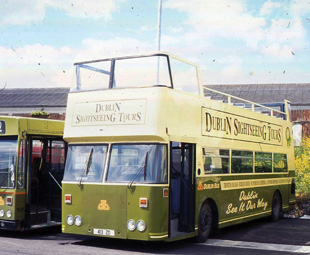 Apart from the cities and towns in the British islands, very few open-top buses were to be found until a few years ago. Today they are working in nearly every large city throughout Europe and the United States – and further afield.

Rome and San Francisco are thought by many to be the natural home of the full open-top buses. Seeing left-hand drive open-top buses with the door on the “wrong” side looks odd, but they are proliferating.

As the weather can often be unreliable, especially in places such as England and Ireland, open-top buses can sometimes be a risky choice for passengers. Such considerations led to the appearance of the partly open-top bus, which has a section at the front under a normal roof section.

Some open-top buses are convertibles – they have detachable top sections containing the roof and side windows, which can be fitted for winter use. However, this idea is not entirely new, as it was pioneered in Britain more than 50 years ago.

There are many variants of this, but, for some passengers and operators the concept of an open-top bus should be simply that: open to the sky, but with the option of escaping downstairs if the weather changes.

Not all open-top buses are used for transporting passengers. The most obvious alternative use is for tree lopping, a requirement for many bus companies operating vehicles along routes with low trees, especially at stops where the bus has to pull into the kerb very close to roadside trees. 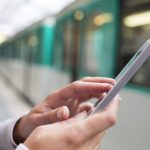 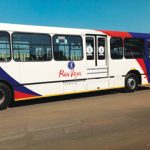