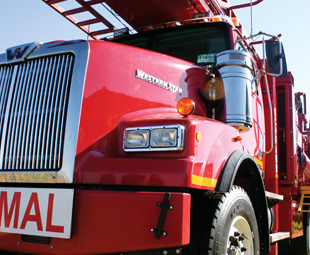 Due to their specialised nature, it’s not all that often we get to feature a Western Star truck. And this one certainly is special, as GAVIN MYERS discovered

What has a V12 engine and Funk gearbox, a Detroit Diesel engine and Allison gearbox, will probably only cover a maximum of 100 000 km in its lifetime and can go 2 000 m into the ground? No, I’m afraid you’re completely wrong. It is, in fact, this magnificent Western Star 4900SB 8×6 rigid chassis-cab fitted with a Schramm T685 drill rig.

A mouthful, but the bright red, long-nosed, slightly rude 39-tonne rig is certainly something to behold – on first acquaintance your jaw will drop. Specially ordered by Hennie Booysen of Booysen Bore Drilling in Kuruman in the Northern Cape, the rig has been specially designed and built with input from Mercedes-Benz South Africa and drilling rig specialist Mincon.

Mincon has had a three-year relationship with Western Star and has designed the rig around the 4900, instead of trying to retrofit it to a truck; something that, in their experience, tends to cause problems. 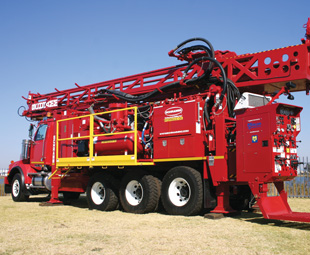 At the time, the companies built a similar rig that was initially based in the Eastern Cape and is now doing duty in the Democratic Republic of Congo. This rig will be used by Booysen’s company for de-watering in the Northern Cape.

Booysen is the biggest drilling contractor in that province and has a fleet of over 40 drill rigs. His company’s main business is with iron-ore mines, and this rig is configured for all drilling other than core.

The drill itself is manufactured by Schramm, which has been manufacturing the units since the 1950s and is considered by Mincon to be “the Rolls-Royce” of drill rigs. With no overriding electronics controlling the hydraulics, Schramm is the most popular drill rig in Africa as its make-up and components are rather basic and common. However, it still packs a punch. Offering a pull-back force of around 45 metric tonnes, the T685 is capable of handling a string of 8,5-inch drill pipes up to more than 1 000 m deep – or 6,5-inch pipes up to 2 000 m deep. 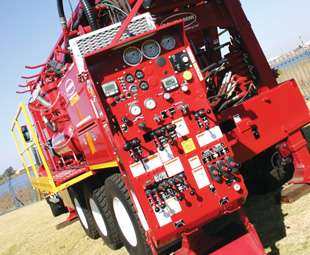 The Western Star 4900 has its own impressive credentials. Driven by a Detroit Diesel Series 60 engine (Euro-2 spec, so that 500 ppm diesel can be used to avoid fuel availability problems) producing around  373 kW (500 hp), the Allison RDS4500 six-speed automatic transmission sends power to the tri-axle Meritor drive axle. “It is important that three of the vehicle’s four axles are driven, to aid in traction when the truck is operating in the difficult terrain typical of an open cast mine,” says Duncan Prince, product manager for Freightliner, FUSO & Western Star. The Allison transmission features a hydraulic intarder, which complements the Series 60’s Jacobs engine brake.

With such specialised heavy machinery doing duty, one would expect maintenance to be frequent and parts to be at a premium. However, Mincon backs the Schramm rig with a 48-hour turnaround time on parts and two-year service intervals. The Western Star makes use of common parts found in other Western Star as well as regular Freightliner trucks operating in South Africa, and can therefore be supported and serviced by one of 15 approved Freightliner/Western Star dealers nationwide.

Posts by Focus on Transport
Prev We shall never surrender
Next Tough times and tougher markets?