Simple half-tonners to suit the pocket 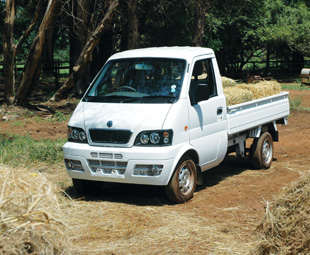 Irene Farm in Centurion near Pretoria is a tranquil area providing relief from the hustle and bustle of city life … until a group of motoring journalists is unleashed on it. Driving among the cows, JACO DE KLERK samples the new range of DFSK light commercial vehicles from Geely.

You probably haven’t wondered if you’re pronouncing “Geely” correctly. I used a hard “g”, as in “gear”, but was soon put right. It’s “Geely” as in “Jeeves” or “Gee whiz” – and gee whiz may just be spot-on for this marque.

One of the top 10 automobile manufacturers in China and the biggest independent manufacturer in that country, Geely may alter perceptions of Chinese vehicles among South Africans.

“People generally don’t set out to buy a Chinese vehicle,” says Corinna Howard from Outlook Africa, Geely South Africa’s media and public relations consultancy. “But we’ve noticed that they’re starting to talk about what type of product they want first, then coming in with where the vehicles are manufactured later.”

Geely International doesn’t manufacture LCVs. However, the size of the South African LCV market prompted Geely SA to maak ’n plan. The company entered into a strategic partnership with the Chongqing Sokon Motor Group in China to import and distribute a range of light commercial vehicles in South Africa under the brand name DFSK. 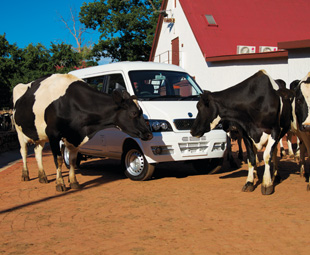 The vehicles, known as the K-series, were launched in early March at Irene Farm – a fitting venue since the company aims to provide simple but functional vehicles ideal for any farmer or small business owner. However, the tranquillity didn’t last long as the journalists put the vehicles through their paces.

At first glance, the quality of the interiors seems significantly improved over the usual interiors of Chinese vehicles. However, after a few rounds it becomes apparent that some tweaking needs to be done – nothing like a door coming out of its hinge or a radio magically turning itself on if a bump is approached with some speed. The suspension is hard, which is understandable for any non-loaded workhorse, and the clutch takes some getting used to, but the gears change smoothly and the steering is much lighter than expected.

The wilful FM/AM radios, cloth seats and 13-inch steel wheels are standard across the entire range. All models use disc brakes for the front wheels with drum brakes at the back; suspension consists of McPherson Struts with coil springs and dampers for the front, and leaf springs with dampers for the rear. All vehicles include a level of standard equipment – such as drop-sides for the Mini Truck, as well as protective bars across the rear windows, front and rear fog lights, and high-mounted stoplights in the Panel Van and Mini Bus – with additional equipment available as optional extras. This approach helps keep the purchase price down, ensuring that the DFSK range upholds Geely’s tradition of providing affordable vehicles, making them ideal for budget-conscious buyers. 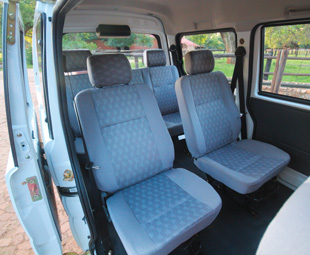 With a price of R59 999, the entry-level 1,0 Single Cab is a great option for buyers seeking a cost-effective load carrier. The vehicle is powered by a 1012 cc Suzuki-based four-cylinder petrol engine that is economic and offers good performance for an engine this size. Thanks to electronic fuel injection, which is standard across the range, this model generates 35 kW at 5 200 r/min and 76 Nm of torque that kicks in from 3 600 r/min.

For R66 999, one can get the 1,3 version Single Cab – powered by a similar four-cylinder, Honda-based fuel-injected engine, which generates 58 kW at 6 000 r/min and 103 Nm of torque, available from 2 800 r/min to 5 000 r/min. The wide torque band provides smooth and consistent pulling power without excessive fuel consumption, ensuring a more comfortable ride. Both models have a cargo space of 2 300 mm x 1 500 mm and a depth of 335 mm.

Then there’s the Double Cab Mini Truck, providing a perfect combination of load and people carrying capabilities at the competitive price of R74 999. This model is only available with the 1,3-litre petrol engine, and has a loading surface of 1 390 mm x
1 400 mm, with a depth of 335 mm. It provides seating for four (maybe not four boer-sized passengers, but the average-sized Tom, Dick or Harry will have ample space). Each person gets a three-point seat belt.

For enclosed cargo carrying, there’s the DFSK Panel Van for R83 999. This vehicle has seating for two and an enclosed loading space of 2 000 mm x 1 320 mm x 1 320 mm. It has two sliding doors and a hatch that opens remarkably wide, making for easier loading and off-loading. But if people are the cargo you want to carry, the Mini Bus, at R84 999, is the ideal choice. It offers seating for a maximum of six adults.

All models are driven by the rear wheels and have a five-speed manual transmission.

The vehicles are immediately available from 50 Geely dealerships nationwide, in white, white or white for now. The vehicles come standard with a one-year/60 000 km warranty, with parts distributed from two warehouses.

DFSK is focusing on the half-tonne segment, but plans to import the one-tonne Double Cab, Single Cab and Mini Bus towards the end of 2013.