Test and drive: the Scania way 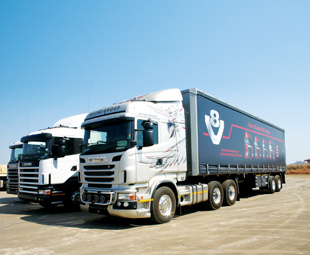 Scania’s new R-Series range was put to test against previous ranges. FOCUS took them for a drive and discovers how they could just about drive themselves

Ever been driving along, when on the opposite side of the road you see a relic of a Beetle headed towards you – seemingly with no driver? You panic until you get a bit closer and see a little white tuft of hair and two beady eyes peering just over the steering wheel, and realise there is a driver after all, albeit an ancient one. It’s a terrifying thought that a car might be hurtling along the road sans driver.

But what if the vehicle pretty much knew how to drive itself? Ok, we’re not quite at the stage where a driver is not needed altogether, but in the new Scania R-Series opti-cruise, their role really is to guide and facilitate the journey rather than drive the truck. From a safety perspective, especially in South Africa, this is huge. With the driver not having to worry about the technical details of driving the truck, he can focus on road conditions and other vehicles – resulting in a safer road for everyone. The new R-Series is also the most fuel efficient vehicle Scania has ever designed – great news for operators.

So let’s get into the details of what makes this series so different from its competitors, as well as previous Scania models. The 2010 model, available in both semi- and fully-automatic versions, uses the same hardware as the previous 2007 model, but has a variety of updates and improvements. Both versions boast smarter gear selection, improved pedal response, fully integrated systems and power mode. On top of this, the fully automatic version also has faster (by 150%) and smoother gear changes, electric clutch control, manoeuvring mode and an inclination sensor.

These features allow for excellent handling of various conditions. For example, in roundabouts the vehicle is able to turn comfortably at very low speeds without high revs. This results in far more control of the situation for the driver. In city driving, the vehicle is able to keep up with traffic, accelerating and stopping easily, and driving easily at low speeds. The electric clutch control in the fully-automatic version also means there is no wear and tear on the clutch pedal during stop-start traffic.

On highways, the vehicle will detect that gears are being changed less often and will automatically switch to cruise control at the selected speed, unless otherwise changed by a touch of the accelerator or brake. The truck will also automatically detect when in rocking mode, meaning less precision clutch control driving for the driver and preventing the damaging spinning of wheels. When taking off, the opti-cruise selects which gear to start in based on weight and inclination, again preventing high revs and unnecessary fuel consumption.

The vehicle’s ability to select the right gear means the truck spends more time in top gears, resulting in greater fuel efficiency. The opti-cruise is also always thinking about the next step – when driving in hilly conditions the truck goes into ecocruise mode. This means it is programmed to drive in the most economical way possible. The vehicle goes at full throttle to ascend the hill until it levels out. If the truck’s speed does not decrease by more than 20 km/h, the system avoids accelerating till the brow of the hill. Going downhill, the speed will increase slightly to that preset on the retarder, giving the vehicle momentum when getting up the next hill. This saves both fuel and time on the journey, and is something the driver does not even have to think about.

Another driving situation the opti-cruise handles with ease is manoeuvring. When in normal mode, the vehicle offers excellent precision; but, for extreme precision, the vehicle offers a special manoeuvring mode. In terms of highway driving, the Scania basic gear selection strategy developed in 1994 was deemed in need of an upgrade by both customers and the market. Listening to clients’ needs is one of Scania’s strengths and the team introduced a completely new gear selection strategy in the opti-cruise, which allows the vehicle to select the appropriate gears on its own. The vehicle also offers power take-off with a single touch of a button, and can even be activated from outside the vehicle. 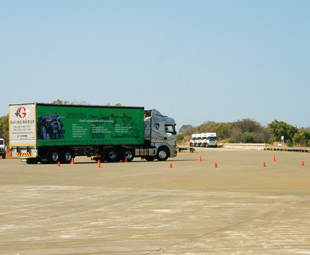 These features make both the fully and semi-automatic versions particularly suited for certain uses. The fully-automatic version is suited to all on-road-applications such as long haul and distribution. It is also suited for construction and timber haulage. Due to the electric clutch control, it is useful in conditions with a moderate number of stops and starts.

Certain technical aspects of the vehicle can be predetermined by the operator in order to suit his needs. The maximum starting gear can be selected and power mode, kick down and reversing at low idling speed, can be enabled or disabled. These options allow for the operator to assess his driver’s ability and adapt the vehicle’s parameters accordingly.

With all these additions and improvements, FOCUS was keen to try out the new model, and compare it to the older versions. The first truck driven, the old 480, carried a payload of 22 tons and, was more than easy to manoeuvre. Although clearly not designed for drivers of the 5’4” variety (it meant having to stand up to push the clutch and accelerator flat on starting and stopping), the driver was not aware of the 22 tons being pulled along behind her in the slightest. Steering was easy, and the pedals are as sensitive as in a car. And this was the oldest version, so we knew the opti-cruise would be something special. Climbing in, one is instantly struck by the smell of leather – the interior of the truck could be compared to that of any high-end luxury motor car. The sleeper bunk is wider than in previous models and can be extended forward.

In terms of driving, the opti-cruise is a breeze – and thanks to the electric clutch this driver did not even have to stand up in this one. All vehicles are fitted with an inbuilt driver rating application. This system rates the driver on factors such as correct breaking and anticipation, and allows drivers to use the system as a constant means of measuring their ability and improving on common mistakes.

If FOCUS’ untrained, inexperienced and extremely unskilled driver could successfully drive this vehicle, perhaps the possibility of Scania’s trucks being able to drive themselves is not too far off! 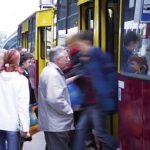 Prev The future of public transport
Next MAN, what a show 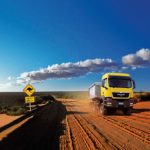