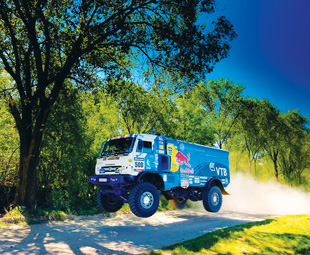 The toughest Dakar in South America was held this year, with just 204 vehicles making it to the finish line. International Truck of the Year chairman Gianenrico Griffini caught up with the two top drivers from the truck category.

Andrey Karginov (driver for the Kamaz Master Team) and Gerard De Rooy (driver for the Iveco Dakar Team) were driving two of the 50 trucks fortunate enough to reach the finish line. According to organisers and participants, the Dakar 2014 will be remembered as the most difficult race, ever, and the two top finishers agree.

Karginov, the race winner, says it’s true that Dakar 2014 was very difficult. “First of all, the length of special stages increased. Last year we had to cover about 3 500 km; this year it was 5 200 km and it had to be completed in same two weeks,” he says. 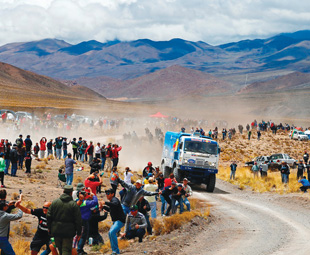 According to Karginov, this race set a record with the altitudes of some of the special stages. “This year we climbed above 4 000 metres. It was very difficult for engines and we felt the loss of capacity. People also had a hard time and had to deal with weakness, headaches, sickness and dizziness.”

De Rooy, who came in at a close second, agrees with his rival, but adds that the intensity of the special stages, coupled with the high temperatures in the first week, made things more difficult. “The temperature was especially difficult for the drivers during the first week and lots of people needed to stop because of technical issues.”

The most challenging stage for De Rooy and his team was the fifth special, because it was a very short one (maximum 300 km) and they had to finish it on three wheels. At the beginning of the special they got stuck in the dunes and broke a rear-axle drive shaft, which left them with one wheel that wasn’t turning.

“Normally this wouldn’t be a problem, but the special was very challenging because of the soft sand, so it was really hard to be committed to the finish. If this had happened on another day where there was a stone surface, it wouldn’t have been a problem, but with the soft sand it really wasn’t nice. But we made it to the end,” he says.

Karginov and his team had some very different challenges. On the first day of the race Karginov was ill and by the second day he had a fever, “The co-driver and mechanic even had to wet me with cold water. I had to have ice put on me before the start. Closer to the end of the special stage I almost lost consciousness, but probably got a second breath and somehow I finished,” he says. 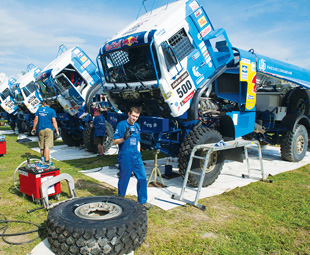 After visiting the doctors and discovering he had acute bronchitis, the organisers decided to direct Karginov to the local hospital in order for him to be examined more thoroughly. “My participation was in doubt, but towards morning I was ready to drive,” he adds.

The 11th stage of the race was a pivotal moment for both men. De Rooy, who was the race leader at the time, had a punctured tyre in Valparaiso and, as a result, lost the position to Karginov, who went on to win the race three minutes ahead of De Rooy.

When asked how he felt about this, De Rooy had this to say: “We are very satisfied with second place. To be second by only three minutes after 5 000 km of driving, it’s nothing. We drove a very good race. We only had some small problems during the specials, but we never stopped apart from the time we had to change the tyre.”

Karginov, however, feels the real turning point in the Dakar for him and his team was the ninth stage, because they had managed to win back 19 minutes of lag from first place, “at that point we understood that victory was possible and there was a chance to reduce the lag even more. As a team we needed to concentrate, to gather our thoughts and avoid mistakes.”

De Rooy says Karginov was going as fast as possible and he took a lot of risks every day. At times he couldn’t believe his eyes when he saw the risks the Kamaz team was taking. “The big difference between the Kamaz team and me was that I wanted to win, that’s for sure, but the Kamaz team needed to win. They had to perform. They had to go full attack,” he says. 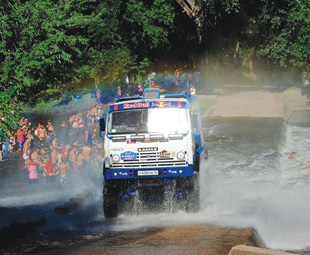 Each of the drivers has a very different driving style. Karginov feels that his driving style is dependent on the situation and the set of tasks. In this situation Karginov used an attacking style of driving. “We had to catch up and win back 40 minutes. I would not say that we drove at a breakneck speed, as some people said about us. We had an attacking style, but we always had the situation under control.”

This year each of the trucks had been improved slightly from last year. According to De Rooy their Powerstar rally trucks only received two changes; the engine and shock absorbers. He says they didn’t change too many things on the truck because last year and the year before the truck was very reliable. “This is more important than a very fast truck that breaks down a lot. You save more time if you don’t break down.”

The Kamaz trucks, on the other hand, had a little bit more done to them: “We worked with the brakes, now the electronics help distribute the forces on all wheels. The fuel tank was moved to the back and we improved the weight distribution of the truck. We replaced the head lighting and the external bars of the cabin were removed.”

When asked what the most important element to win the Dakar was, the two top drivers agreed that it takes everyone on the team. “About 50 percent depends on the car and 50 percent on the crew. The crew is divided into three equal parts: driver, co-driver and mechanic,” says Karginov.

Off the back of this year’s experience De Rooy says: “Everything needs to be 100 percent. If something is wrong, you will not win the Dakar, that’s how close it’s been for the last years. All the elements have to be perfect.” 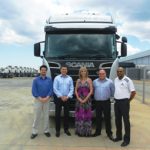 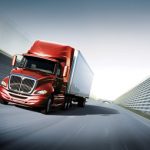