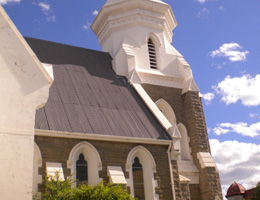 There is no doubt about it, South Africa’s road transport industry has taken sustainability to heart – with the majority of operators and original equipment manufacturers doing more than their part to curb the effects they’re having on the environment … But, with the sheer size of this important sector, some tragedies do slip in.

Vibrations from thousands of trucks are having a negative effect on a magnificent church building, the Nederduitse Gereformeerde Moedergemeente (Dutch Reformed Mother Church) in Beaufort West, Western Cape – which has a rich history spanning back to 1820.

“The church is nearly 200 years old,” emphasises Jurie Taylor, principal of Niko Brummer Primary School in Beaufort West. “The building is about five metres from the N1. Massive vibrations occur when the trucks stop and pull away from a traffic light virtually on the church’s doorstep.”

Minister Japie van Straaten adds that a traffic officer at the town’s weighbridge told him that an average of 25 000 heavy vehicles pass the station each month – which has huge ramifications. “An engineer, who was passing through, made us aware of some cracks in the church’s tower – which indicates that the structure could collapse at some stage,” he points out. “The stained glass windows are also cracking and rattling out of their frames.”

So the historic church is in dire need of some restorations. “We have already spoken to various firms that do restoration work for the South African Heritage Resources Agency to determine the magnitude of the restoration work,” says Van Straaten – adding that it will cost around R1,5 million.

Taylor points out: “Our community is reluctant to stand with cupped hands and ask for money, but we realise that we’ll never raise sufficient funds from our congregation and our community alone.”

Van Straaten adds that more than 70 percent of the Beaufort West community lives below the breadline, and things aren’t looking too rosy for members of the congregation either. “But we’ve managed to raise about R600 000 of the estimated R1,5 million – which is what it will cost to clean and restore the church building.”

However, one generous transport operator – HFR Schaefer Vervoer, a transport company based in Johannesburg – has kick-started the church’s “external” fundraiser by donating R10 000 to this wonderful cause.

“We are very grateful to HFR for helping us with this undertaking,” says Taylor. This is another step towards the congregation’s goal of completing the restorations by 2020, in time for the church’s 200th birthday.

So the Beaufort West community and church members are doing their part to restore this wonderful historic building, but they do need help … And, with the social responsibility that our industry carries, there will surely be many that join HFR and make generous donations. 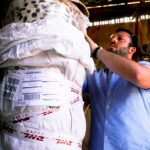 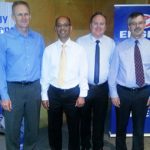