In for the long run 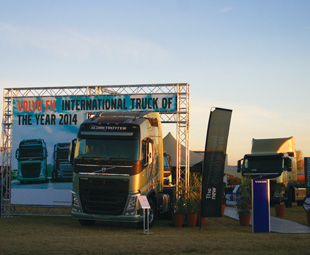 A visit to the Volvo stand at Nampo was like popping in for tea with a long-married couple. CHARLEEN CLARKE explains why …

Couples who have been married for decades are generally content. Comfortable. Happy with each other’s company. The fireworks are long over. In their place is a sense of general satisfaction. It’s very obvious they’re in it for the long run.

The same could be said of the vibe at Volvo’s stand at Nampo. Yes, of course, there were some fabulous displays, well deserving of the occasional firework or two (notably the company’s World Truck of the Year display; the FH is the current title holder). But, in general, the atmosphere was more one of a sense of well-being and satisfaction.

It was really nice.

Malcolm Gush, general manager of truck sales, was in a similarly contented and relaxed mood – largely because the stand was, once again, a success. “We have been here at Nampo, in this specific spot, for as long as we can remember. It works extremely well for us because of the strong commercial focus. We don’t have thousands of people on our stand, but those who do come to our stand are really keen buyers,” he tells FOCUS. 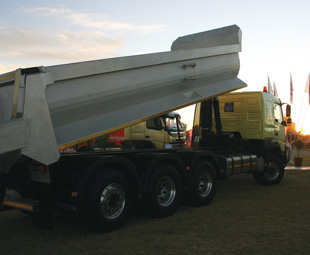 That keenness is reflected in Volvo’s success within this market. “The agricultural market is one of our target segments. Most of the trucks in the agricultural sector are involved in long-distance transport; hauling grain and cattle. So this application suits our trucks. After all, the FH is designed specifically for this purpose,” he says.

Not surprisingly, Volvo is “either number one or number two in the agricultural market” – depending on how you segment this market, says Gush. The agricultural sector is the fourth-largest segment in South Africa, with parcel and post (general haulage) in first spot, daily commodities in second and mining in third. “When we talk about mining in South Africa, this includes inter-regional, long-distance trucks,” says Gush.

Irrespective of how you segment the market, one thing is certain: it’s changing. “There are fewer farmers out there, but the farmers who are left are far more professional than in the past. Production has stabilised with the same number of farmers. Those who remain are more mechanised,” Gush tells FOCUS.

This has impacted on their transport requirements. “They want uptime, productivity and fuel efficiency,” he explains.

This trend has benefited Volvo. “We sell to two of the biggest dairy companies in South Africa and they wouldn’t traditionally buy Volvo because it’s a premium brand. But now they look at uptime and fuel efficiency and these make the total ownership costs much lower. As such, they have turned to the Volvo brand. We maintain their trucks for them; as their partner, they have given us complete responsibility,” he reveals.

Flexibility is paramount for customers such as these. “One of these dairy companies is running close to 30 000 km a month per vehicle. They collect from the farmer, go to processing plant, and then they run to Gauteng, Cape Town or Port Elizabeth – all in a day. So comfort is very important. But the truck also has to do many jobs; they don’t want simple trucks. One day they may be transporting fresh milk for yoghurt production; the next day they may be using the same truck to transport coal to the processing plant … They don’t want a vehicle that is suitable only for farm work or only for long distance. That’s why they choose Volvo; it is suitable for farm work and long-distance applications,” Gush comments.

Another company within the agricultural sector, a leader within the beef sector, has also turned to Volvo for its trucking requirements. “We transport 100 percent of its livestock now, and we have dominated this fleet for about four years. An extremely professional business that is run very scientifically, this company used to run interlinks, but now they run tri-axles and they transport the same number of cattle. Those livestock trailers are very heavy. But now, with a three axle, they are able to transport the same number of cattle using a lower horsepower vehicle. This combination has saved them about
R20 million a year,” he reveals. 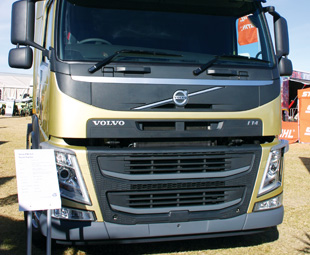 According to Gush, companies such as these are opting for Volvo because they are looking at lifetime costs. “Most farmers used to subcontract their transport. Now they are buying their own trucks, because they have a good critical mass. These customers are very knowledgeable. They are business orientated. They look at what they are laying out and what they will get back. They look at trade-in value and the cost of maintenance contracts … all these factors play a role in the purchasing decision. At the end of the day, they will buy a better brand because they want to get a return. When they trade in the vehicle they want a good value,” he comments.

Gush says that the agricultural market is an interesting one because it’s not about huge orders. “If you’re working in this industry you’re not talking about big orders; it’s more of a trickle all the time. But those orders are significant. The farmers don’t utilise their vehicles 100 percent of the time. They may only use them in peak periods. But when the truck is running, they want the best utilisation – so they carefully weigh up their purchases before signing on the dotted line.”

At Nampo in 2013, some 12 customers did that – and left the show as proud owners of new Volvos. In 2014, Gush is hoping to conclude 20 truck sales as a direct result of the company’s participation at Nampo. “But this is not so much about selling on the day; it is also about forming relationships. “A Volvo is not the cheapest truck … but we stress to customers that they need to look at lifetime costs and take a holistic view. We want to plant the seed here at Nampo and then we will follow up afterwards. This business is about long-term relationships. We have often been talking to a customer for three or four years before they buy a vehicle …” he reveals.

Of course, this isn’t always the norm. As we’re concluding our interview, a farmer walks onto the Volvo stand. “Ek wil ‘n lorrie koop. Vat jy kontant?” he asks. (“I want to buy a truck. Do you take cash?” for all the souties out there.)

I think I’ll pop back to Nampo in a couple of decades and see if he’s still married to the Volvo brand. I am sure he will be … 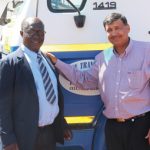 Prev Making it happen
Next Khaki, kortbroek … and technology! 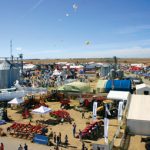